It’s hard to explain. My heart rate picked up. I felt warm. I felt shaky in a way that made my paws feel like marshmallows beneath me. I didn’t understand it. I thought to myself, “self: could this be love?”

It was during my brief stint with the family in Port Washington, Wisconsin that adopted me for a few weeks. You know, the one with three cats and two other dogs? They deemed me to be too much a behavioral problem for them and returned me to the humane society, but not before I escaped on my own a few times. It began as what I would refer to as attention-seeking behavior, as I felt I didn’t receive as much emotional attention from the people trying to share it with so many other animals. But one warm summer day I found a new reason to make my way out the doggie door, jump the four-foot fence and explore the neighborhood.

Her name was Taffy, and she is the most beautiful Beagle I’ve ever seen. She lived a few blocks away with her forever dad Eric, who adopted her as a puppy. I’m not certain Eric ever knew what was happening between us since I only ever just saw her from a distance. But there was something in her eyes that made me wish we could run around her beautiful fenced in yard together for hours and hours. 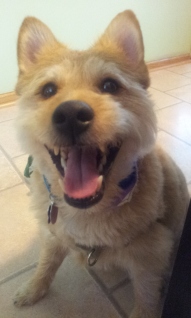 I know it might sound silly, since science tells very different stories about doggie love. Some scientists deny that dogs feel love for one another. Others believe the unconditional love we show our people is testimony to our passionate potential to love other dogs. It probably doesn’t come as a surprise to anyone that I am a believer in the latter theory that indeed dogs do love each other, perhaps not like humans but instead in ways that (at least the majority of) people wouldn’t understand.

Scientific theories aside, what I know for sure is I’d never felt like this before. I certainly loved my birth mom and brothers, Tiger and his puppies, and Rusty from the humane society. What I felt for Taffy was different in a way that stuck with me long after that family returned me to the humane society.

So you can imagine my surprise when one day, my parents brought me with them to that same northern suburb of Milwaukee. I’d come to recognize the scenery, as it is also where my dad grew up and where his parents still live. But this time we took a few different turns and ended up in my old neighborhood. In Taffy’s neighborhood. My dreams sometimes get the best of me, so I had to convince myself what was happening was real life rather than a dream. The memory I had of my dear Taffy was a love uncommon.

As were the moments that followed. I was reunited with Taffy that day. It turns out my forever dad and her forever dad go to that place called work together every day, and had become friends. I didn’t care. I was so happy to see her and finally have our time together running around like ninnies in her fenced-in backyard. It was a dream come true.

I’ve only seen her one more time after that, but I don’t have to spend more time with her to be sure. She is definitely one of the loves of my little doggie life. My mind still doesn’t believe it, but my heart knows it to be truth. I’m sure scientists wouldn’t be able to explain my rapid heart rate, above average body temperature and marshmallow paws either.

But time has offered me the chance to reflect on my feelings, which I now find brought to life through the words of ancient Chinese philosopher Lao Tzu, who said “being deeply loved by someone gives you strength, while loving someone gives you courage.” I needed both strength and courage at that point in my journey, so I will be forever grateful to Taffy for helping me find what I needed to get through to the next chapter of my life.

26 Responses to “A Love Uncommon”