The Importance of Emotional Attention June 21, 2014

To most people it probably sounds pretty ridiculous. Mom is blessed. I see her a lot more than I used to. But that’s beside the point. Because when this happens, it doesn’t matter how often we see each other. She gets pretty mad. 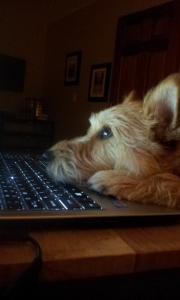 “So…what did you do all day?” is probably one of the worst questions a husband can ever ask a wife. Especially when there is a small child involved. It carries with it a somewhat hurtful (albeit probably unintentional) amount of loathing that makes one hard-working mother feel as though she isn’t quite working hard enough. While I know in my heart that is certainly not the message dad intended to deliver this afternoon upon return from his day at the race track with his dad, that is exactly what he said.

And, as it were, his intentions didn’t matter. Mom’s feelings were hurt and there is sometimes no turning back from that. Because in her eyes our day was plenty busy. We played and ate and slept and played some more. Auntie Morgan even came over for some pool time. Granted, no laundry was done. No dishes were cleaned. Nothing was dusted. But that didn’t matter, because overall, it was a very nice day.

I think this misunderstanding that happened between my people today reflects a common misconception in society. Because the way I see it people all work very hard. And I was raised on a “work hard, play hard” kind of philosophy. But that’s so far from reality for my people. There is no playing hard around here since (for the most part) they would rather be with each other than anywhere else on a Saturday night.

So I suppose it sounds pretty ridiculous to most other people, but I stand by the truth I know in my heart, which is that my dear forever mom and dad are truly blessed. It might not seem like it to them as the hard working people they are, but they are fortunate enough to spend a lot of time with dear baby Carter. Not to mention with me, as I do require an average (to above average) amount of emotional attention. I just think it’s too easy sometimes to forget the importance of emotional attention.

And that reminds me all to clearly of the words of dear transcendentalist thinker Ralph Waldo Emerson, who suggested “nobody can bring you peace but yourself.”

I know he’s right. Yet I know the peace I felt in my heart today when several of my favorite people were happy together. That is a peace of emotional attention money can’t buy.

6 Responses to “The Importance of Emotional Attention”