There is no time like the present. This I’ve always known to be true. Today is a gift, in which I chose to be present for not just myself but for those around me. But sometimes when I watch my forever people, I can’t help but wonder what would happen if there would be an extra hour in the day. 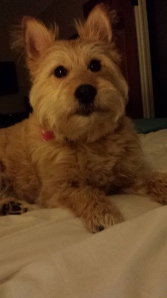 As it is, it sometimes makes my tail spin watching them hustle around the house throughout the day, balancing work and family time with social time with cooking and cleaning and laundry and anything else life throws at them in those precious 24 hours. Then there’s dear baby Carter, who also keeps me guessing in each passing moment.

Tonight as mom and dad spent a few precious moments together playing with Carter before mom went to that place called work, I know how I would chose to spend that extra hour if I had it. I would choose to spend it like that, as we were in that 15 minutes. I was scurrying around, Carter was giggling, and mom and dad were happy.

This is not to say they’re not happy with their other 24 hours of today. I know that is certainly not the case. But in those moments, they were truly and genuinely happy in the contagious joy kind of way. That is how I would spend an extra hour of time if I had it.

I think that’s selfish of me, though. Because if we had that extra hour we’d want another. And another. And another. So, as special as that time would be, I think I learned a lesson from the joy today similar to the words of English philosopher William Penn who said “time is what we want most, but what we use worst.”

There is no time like the present. But ultimately, time itself is just a thing. It is how we live in that time that matters. So as nice as it would be to have another hour in every day, I don’t think it’s about having more time. It’s about making the most of the time we have.

3 Responses to “Only Time”