No news is good news, or so they say. Mom even said so this morning when she mentioned to dad she hadn’t heard anything from the doggie doctor about the blood test they did earlier this week. Usually if you don’t hear anything, everything is fine.

Until you do hear something. And it’s not good news. It happened to us a mere three hours after mom breathed a proverbial sigh of relief over not hearing anything. The phone call. Something about white blood cells being slightly higher than they should be and how they would like to do another test to find out if its really something to worry about. 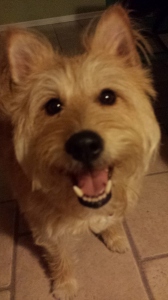 No need for the test as far as worry is concerned. I’m worried. Mom’s worried. It’s a whole bunch of anxiety and nerves around here, and there is a whole lot of nothing we can do about it until they run more tests on Monday. It could be bad. Very, very bad. Or it could be nothing. But right now none of that matters because I will admit it. I’m scared.

Mom must know it too, since she showed me (even) more love than usual all day. Dad and dear baby Carter even got involved, which was nice while oddly at the same time not all that comforting.

It brings to mind the whole idea of preparing for the worst while hoping for the best. I’m an optimist. I shouldn’t be afraid or think about the worst case scenario because I have joy in my heart. I’ve come to understand this joy is like an antidote to most forms of negativity, and yet I’m finding it hard to contest this sense of fear I have. While there are exceptions, I think the fear of the unknown is a living thing that can consume us if we let it.

The ancient Roman poet Persius once suggested “we consume our tomorrows fretting about our yesterdays.” I’d rather be present in today.

I know in my heart I have the power not to let this get to me. I can let it in and feel it, but it doesn’t have to take over my life for the next few days, weeks or years. I won’t let it. I will stand and fight whatever it is with my beloved forever family by my side. I will live.

2 Responses to “Hurry Up and Wait”