I don’t remember who it was, but I also don’t really think it matters. After a couple weeks of dreary rainy and colder than usual weather, the sun shined brightly on us yesterday. It was a beautiful day in the neighborhood, as families and their dogs walked the streets. There was giggling and happiness and to be honest I felt a little left out.

At least until it happened. Outside is one of my favorite people words, and I think I’ve trained dear baby Carter to feel the same. We were standing there, together, at the door. We were kindred spirits in that moment, both wanting the same result from our actions.

Fortunately the message was received, and outside we went. Mom and dad and Carter and I, outside in the sunshine together. Dad cleaned up the yard. Mom followed an exploratory Carter. Carter followed me. There was play and laughter and a good time was had by all.

Later when we were back inside, there was a different feel to the group than there had been previously. There was a sense of peace and contentment that was somehow more noticeable to me following the fun outside. 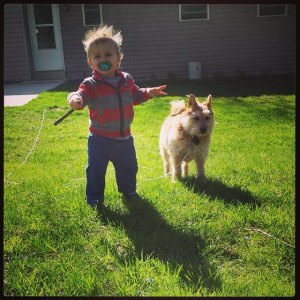 “Look deep into nature, and then you will understand everything better,” suggested theoretical physicist Albert Einstein.

I didn’t even have to look very deep. I didn’t have to know whose idea it was (though I’d argue it was the dynamic duo that is Carter and I). The point was the time outside together was good for the soul. Sure, there were a million other things we could have done with that half hour of time. Practical things. Necessary things. Like laundry. And dinner. (Among other things).

But I would argue this, too, was practical. This, too, was necessary. Because it helped clear everyone’s minds and functioned almost as a restart button for the day. It helped us all regroup and focus on what is really important. It cleared our minds. Sometimes that really is more important than crossing off two more things on a to-do list. Sometimes that is just what the doctor ordered.

2 Responses to “The Power of Wind”