It came completely out of nowhere. I guess I shouldn’t be that surprised since it’s not the first time it’s happened. But today it hit me like a ton of bricks. Sometimes I miss my old life. There, I said it.

The one where my dear forever mom and I took daily walks around the neighborhood. The one where I visited my friends at the dog park frequently. The one where I accompanied mom on something she calls errands for no other reason but to keep her company. The one were I came first. 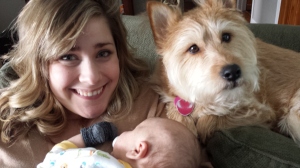 Things have been different since dear baby Carter came home 16 months ago. I can even admit to a having had a bout of doggie depression for a bit immediately following his arrival. Not because I was upset that I finally got to meet my new little person or bitter about the joy he brought to my forever family, but because I knew things would never be the same.

It occurred to me today as I sat by my favorite tree in my backyard paradise, watching my aunt Morgan and grandma play with Carter. He was doing his best to carry on a conversation with them in a way only he can do. He’s started saying “uh oh” pretty repeatedly, though I’m not convinced he has made the connection to what exactly it means. He was giggling as the three of them looked through a book and grandma pointed to colors and he said “pretty” There was a whole lot of joy happening.

Yet I suddenly was plagued with something that didn’t resemble joy at all. Jealousy. From the ground up, it is indeed a very lonely word. I realized as soon as it was happening how silly it all is, too. For me to be jealous of Carter and the joy he brings to the lives of my beloved family simply doesn’t make sense. So instead of sitting there by my tree feeling sorry for myself, I squelched the pang I felt in my heart for the past. I joined the party. And I’m so glad I did.

I think it’s a natural thing to occasionally long for some part of a past life. But then I remember that right along with those car rides and dog park trips and walks around the neighborhood were the lonely days. The days when my people would leave for that place called work and I would spend the day roaming the house and napping mostly. Now there is almost always someone around. And while they (more often than not) are here more for Carter’s sake than mine, it’s been a welcome change always having someone around. I wouldn’t trade that for my old life for anything.

2 Responses to “The Old Life”