Sometimes it’s incredibly subtle. Other times it hits me in the face. Literally. I speak, of course, of dear baby Carter and all the things that change with him on a daily basis. I frequently hear mom repeat the same response when people ask her how he’s doing. There is something new every day, she says. 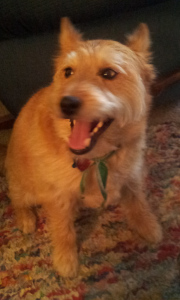 Recently much of the change has been physical. He’s moving. A lot. He’s crawling all over the place and getting into all kinds of things he shouldn’t. Mom says she doesn’t think it will be long before he’s walking. And he is strong. You wouldn’t guess it from looking at his 20-pound frame, but take it from me – there is a whole lot of gusto in those tiny little guns of his.

But something happened tonight that struck me. It might have been a fluke. Like one of those things you can convince yourself of even if it might not actually have been the case. But I have a pretty keen sense of hearing and tonight I think Carter said the two most important first words he could ever say. Both have been making regular appearances in his daily babble fest of syllables right along with baabaabaa. Today there was something different though, like he was saying things on purpose.

“Mamamama,” he said when mom left the room to warm up his bedtime bottle. And, less then 15 minutes later, “dada” came out of his mouth as dad gave him his nightly bath.

As I said, it is possible this is all wishful thinking and just happened by coincidence. Because sometimes it is incredibly subtle. I’m pretty sure mom wouldn’t have even thought anything of it had dad not pointed it out. And then at bath time, well, it seems as though everything pieced together just as it should in that moment.

I know I’ve had my qualms about having a strong, mobile, babbler of a little person in my forever home. But he’s managed to do something pretty spectacular to my way of thinking. Change is not a favorite thing of mine, but he has changed how I perceive the unknown. As he grows, he changes each day. And as he changes, I realize he has changed me. I still love routine, but there is something about knowing tomorrow will bring something new again brings even more joy to each new day. As the sun rises, there will be change. And that’s a fabulous thing.