Brisk walks around the tree-lined streets of the neighborhood. Snuggling on mom’s lap while she and dad sip pumpkin spice lattes by the bonfire in the backyard. Snagging the occasional apple slice that makes its way onto the kitchen floor while mom bakes one of her apple pies on a lazy Sunday afternoon. These are the fall moments to embrace. Haunted houses, spooky corn mazes and scary movies filled with blood, guts and gore? Not so much.

I can’t personally understand why anyone would ever purposely subject themselves to any of these fear-inducing fall traditions. But then again, I have my reasons. As one who has lived on the receiving side of abuse (both physical and verbal), I am here to testify fear is truly its own four-letter word.

And that’s coming from a four-legged mind that generally doesn’t process swear words. Dogs don’t swear. Sure, we have our own unique ways to demonstrate choice words. But that’s one of the perks of silence – we never really have the opportunity to say something we will later regret. 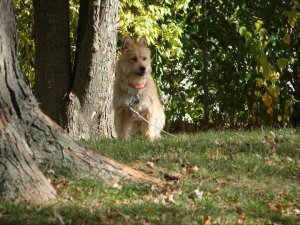 It doesn’t happen often in my forever home, but it used to happen a lot in my life before my forever people rescued me. People swearing, saying hurtful things they didn’t mean, and ultimately filling their lives with nothing but regret. Well, I guess I’m not sure about the regret part. That’s not for me to judge.

What I do know is the fears I have each have a reason, mostly relating to the man with the leather belt. He swore a lot. Usually after he’d been drinking. And he is the reason I grew to fear leather belts, power tools and vacuum cleaners.

I remember the way his breath smelled on my face the time he thought he would vacuum me because he hated all my shedding. I can picture the glazed look in his eyes when he thought he’d cut my nails with his cordless drill. And the belt. That was the worst of it. The belt wasn’t usually meant for me, at least until I intervened when he would use it on my dearest little Jo (my little person at the time).

But there is this thing about fear. It has a way of controlling us if we let it. And it’s a huge roadblock to the one combination of things that can cure regret: forgive and forget. I have long since forgiven the man, but I can honestly say I will never forget the fear. It’s a part of me I can’t truly shut off, even with my forever people. I have absolutely no reason to believe my dad would ever use his belt on me yet I still cower at the sight of it. The same goes for the vacuum and the drill.

So I don’t know why people purposely subject themselves to fearful things this time of year. It’s one of those people things I have accepted I may never understand. Instead I focus my emotional energy on the words of Martin Luther King Jr. “Darkness cannot drive out darkness; only light can do that,” he said. “Hate cannot drive out hate; only love can do that.”