I’ve seen it all before. And the story ends the same every time. But today the moral of that story took me by surprise.

My mom misplaced her glasses this morning. She looked everywhere as I followed her through the house. They weren’t on the nightstand or under the bed (I helped her look). They weren’t in either of the bathrooms. They weren’t in the freezer (stranger things have happened). So she stopped looking. She went about her other business and that’s when it happened. The lost glasses were found on the dresser in the bedroom right where she left them the night before. Right where the belonged. 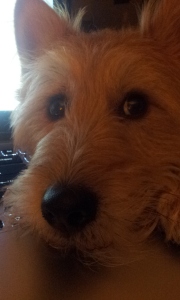 And it struck me. She had to stop looking to find what was lost. It got me to thinking about this misconception I think people have about us canines being able to find anything we’ve left someplace. Sure, there are some breeds that are especially gifted at tracking just about anything. But there are others who leave a graveyard of buried bones in the backyard of a home when moving to another. I’m not proud to say I probably fall into the second category myself.

Especially when I think back to one night in particular at the Oshkosh Humane Society. It was the night after Rusty left me to go to doggie heaven. He took his contagious optimism with him, leaving me behind with nothing but my thoughts. So I resolved to change some things that night. I resolved to stop trying so hard to be adopted. I was probably not helping matters by trying to jump into the arms of all of my visitors anyway. So I stopped looking.

I know it sounds terrible coming from your resident doggie optimist but sometimes I think that’s what it takes to find what we’re really looking for. “Not until we are lost do we begin to understand ourselves,” as one of my favorite transcendentalist thinkers Henry David Thoreau put it.

I’ve seen it all before and it always seems to end the same way. It’s quite the paradox really. From little things like mom’s glasses to life-changing things like when my forever people found me, sometimes what we seek is more easily found when we stop looking for it. And so the lost is found.

I will never forget my first day at the Oshkosh Humane Society.

I remember being terrified at first when I was surrounded by people I didn’t know in this strange place. I watched in awe as a pool of dirty brown goo developed on the floor around me when they sprayed me down. And I couldn’t believe the size of the mangy matted pile of fur they trimmed off after I was cleaned. Then they fed me the most amazing kibble I’d ever tasted and shortly thereafter I emerged from the cleaning area a new (albeit horrified) dog. I could get used to all of this attention, I thought to myself.

Then it happened. They put me away in a cage where I remained for the rest of the day. A nice lady named Sarah came to feed me again and let me outside briefly, but that was it. Granted, the scenery indoors was a lot nicer than the garbage cans and cardboard boxes I was used to, but that first night was one of the most quiet, lonely and dark of my entire life.

This is it, I thought, this is where it’s all going to end. Little did I know that would also be the night that would change my life for the better in ways I could never have imagined.

That was the night I met Rusty. He was a 15-year-old golden retriever in the cage next to me. On this awful night when I had given up, Rusty reminded me that sometimes we get pushed on our backs to force us to look up and see some sunshine. That night, he shared with me stories of the family he had been brought into as a puppy. A family who loved him, played with him, and brought to life a joy in his heart that I could see in his eyes. He told me about how sad the family was to give him up to the shelter when both of his people parents lost their job and had to move into an apartment where they didn’t allow dogs. They used to come visit, he said, but then I think it got too sad. They visited less and less frequently as time went on. Days turned into months, then years.

I was deeply devastated for him, but his perspective on the matter resonated with me on a level I didn’t realize at the time. He was incredibly optimistic, grateful even, for everything he’d lived through. He wouldn’t trade his time with his forever family for all the Beggin’ Strips in the world. In his old age, he was wealthy with wisdom. He was joy: from the ground up.

I felt so blessed to find a comrade in this new place, but I had no idea how special Rusty really was until he was gone. It happened only a few days later, and I remember that day vividly too. I was kind of jealous of him, thinking he was going to the cleaning room where I got all the attention. Instead, he went down a different hallway, into a different room, from which he never emerged again.

But he wouldn’t have wanted me to mourn his loss. No sir. Remembering Rusty means living his legacy and pawing it forward. The day after I lost my mentor was the first day I awoke with my newfound commitment to seeing the good in all people and things.

“Our dead are never dead to us, until we have forgotten them,” English novelist George Eliot reasoned.

Rusty’s optimism lit a flame in my heart that no one can ever blow out. I will never forget, dear Rusty. I will not forget.