I used to think it was pretty cool to be a know-it-all. Worse than that, I thought I did know it all. That is, until I realized I didn’t. The older I get, the more I realize how much there really is to learn. In reality, I know nothing in the greater context of everything.

This came to mind tonight as the story I was going to share shaped into something completely different. The evening started off better than most, with lots of laughter and love. Mom and dad enjoyed dinner together, after which dad showed an above average interest in spending time with baby Carter. He rocked him and talked to him and played with him. Meanwhile, Carter cooed and smiled and seemed to be having the time of his life while mom and I sat by and watched the scene unfold. It was like something from a movie.

Until it wasn’t. None of us will ever know why it happened, but Carter started crying. Mom and dad ran through all the usual suspects – he’s not hungry because he just ate, he’s not wet because we just changed him, he doesn’t have a fever and all four limbs are still well attached. So what could possibly be wrong? It was kind of a devastating turn for the worse but I was still kind of surprised by what happened next. (Especially when you consider the truth – this is normal baby behavior. Every now and then they cry. It happens. We’ve been over this).

Tension built and they turned on each other. Mom and dad got upset. With each other. Even though I know (and they know) it was completely unnecessary for them to do so. In reality, they were simply sharing in frustration and confusion and exhaustion and it all just caught up with them. But I realized something. Dad said something he’s said more than once before about not being good with babies. About not knowing what he’s doing. To which mom responded that she doesn’t know what she’s doing either.

I’m hardly a know-it-all, but in this situation all I wanted to do was raise my little doggie paw to correct them both. They may not know everything about parenting a newborn. But they’re doing great. It’s okay not to know what you’re doing sometimes. It’s okay to learn as you go. And (perhaps most importantly) it’s a blessing that they have each other to learn with. They can work through challenges together and celebrate success together. They can learn together. And they have.

They did it again tonight when they brought the argument to a quick and (fairly) painless close. Because it’s not always about knowing it all.  Sometimes the smartest thing you can do is admit you don’t know everything.

There is usually crying. And some yelling. And some choice words. It’s not a pleasant thing to witness, and yet I am at the mercy of those engaged it the middle of it all. I have no choice but to stand by and observe. Arguments.

They doesn’t happen often in the Schmidt home, but when they do they definitely fall into a category of conversations I would prefer to never have heard. Yet I remain by both mom and dad (a tricky place to be in such situations), steadfast and true. I love them both with equal halves of my heart and never take sides. 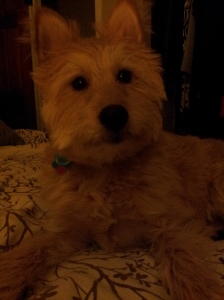 Except for once. I remember because it was a dreary early winter day like today a few years ago. The grey mood of the sky was directly reflective of the emotional context of my forever family. Mom had been blue for a while. And not blue like the color. She was sad. I think I knew it before dad because us canines have a way of sensing these things. She was tired a lot. She wasn’t as responsive to my attempts to engage in chase or pickle in the middle. It seems that place called work was among the things that had worn her down into a shell-like version of herself.

So I sided with dad the day he confronted her about it. I hated seeing her that way, and she needed to hear everything he had to say. It wasn’t comfortable for any of us, yet I know that was a day we will not soon forget. It will stick with us for all of the right reasons and none of the wrong. And it wasn’t fun.

Crying, yelling and choice words were among the key players. I remember wishing I could be somewhere (anywhere) else but in that room. But then I remember the color blue mom was then and see how happy she is now and I realize how important those conversations can be.

“The character of a man is known from his conversations,” suggested Ancient Greek dramatist Menander. In that case, I don’t think it’s a coincidence that sometimes the toughest conversations are the most important ones to have. They show love, not hate. They show concern, not contempt. And ultimately they lead to joy, even if it doesn’t seem that way in the moment.