It’s not uncommon for it to happen at any given time during the year. Thanks to the evolution of streaming radio, it can happen with the touch of a button. And around here it does. It doesn’t matter if it’s February or July or September. Christmas music is a favorite thing for my dear forever mom.

What that means for me is I get to hear all my holiday favorites whether its snowy and frigid or sunny and toasty. And I’m not going to lie – it has a way of evoking that special sense of the magic of Christmas regardless of when I hear the words. Frank Sinatra’s original version of “Have Yourself a Merry Little Christmas” and Mariah Carey’s “All I Want for Christmas Is You” are two of the best in my opinion.

Today I (re)discovered a familiar tune that I had forgotten about in recent years. I haven’t heard it much for whatever reason, but when I heard it today it invigorated my previously lacking sense of holiday happiness. 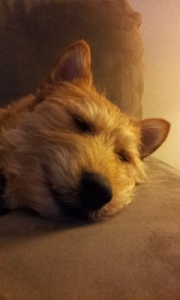 “Let there be peace on Earth, and let it begin with me,” the song goes. “Let there be peace on Earth, the peace that was meant to be.” There is something so simple about the lyrics, but what stands out to me is the sense of personal responsibility for one’s role in the world. A personal responsibility for the impact we have on others. And (good or bad) it doesn’t take much.

I think I heard one too many stories of the rude and pushy people out there in the world this holiday season. It got to me.

Today was not unlike most days in my forever home. But hearing that song reminded me yet again what is important in even the most normal of days. Joy. Peace. Love. From the ground up, these are the building blocks of who I am.

I remember it like it was yesterday. It was freezing cold outside, but snow was falling in the peaceful way it does in a snow storm. I was watching Jo watch the flakes fall from heaven from my favorite vantage point snuggled against the crook of her tiny legs. Carols were playing softly in the background, and the house smelled like hot chocolate and cinnamon.

It was Christmas Eve, and though Jo and the man with the leather belt didn’t have much, the man found it in his (usually stone cold) heart to make something special of the holiday. There were presents wrapped under the Christmas tree he helped Jo and I decorate, and as Jo opened them I was overcome with the purest sense of joy as I watched the giddy glee take over her usually very serious face.

It didn’t occur to me in the least that something under the tree was for me. I had never gotten an actual Christmas present. Joy had always been enough. Or so I thought.

If I thought Jo was joyful as she received her gifts, that was nothing compared to how she embodied happiness as she handed me my gift. It was wrapped with pretty paper and a ribbon, which I remember thinking was so silly since I obviously couldn’t unwrap it myself. “To Wiley, from your Jo” she read the tag to me before tearing into the box. Out she pulled one of the most beautiful things I had ever seen. A collar she put together using things she had around the house (ribbons, broken head bands and the like) and a shiny tag that read “Wiley.”

If dogs could cry, I would have been bawling. But alas, all I could do was lick her and love her even more than usual, which was no hardship for me by any means. That was the very first collar I had and in many ways it remains my favorite to this day.

It wasn’t all that long after that blessed day that I remember feeling my heart break when the man with the leather belt ripped my precious collar off that day he left me on the side of the road. I loved being Jo’s Wiley. I was her protector, and she was mine. I will never forget her, or that beloved collar she gave me.

But I realized many (many) blessed days later that it’s not about the collar. It’s about belonging. It’s about knowing where I belong. Where home is.

I know there are dogs who nip and scratch and tear at their collars. I’ve never been one of them. My collar says who I am, but more importantly it says what I am. I am somebody’s. I belong. My people have changed the collars themselves up a few times since finding my forever home, but the one I’m wearing now says it all. “Rescued” it reads. Having a home, and having reminder of that to call my own is the best gift I could ever be given.

It was 2 a.m. when it occurred to me. This whole mom being nine months pregnant thing is disrupting my sleep schedule almost as much as it is for her and dad. I’m up every time she’s up (which is more and more frequent lately). Certainly she can’t go wherever she’s going alone. Someone has to watch over her to make sure she’s safe wandering the house in the dark. 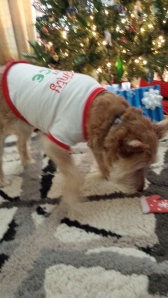 So I follow her wherever she wanders off to, regardless of the time and frequency. Today during our 2 a.m. rendezvous I was overcome with two very impactful pieces of information. First, that it is Christmas Eve. Day one of two of mom’s most favorite days of year. And second, it is freezing outside. Literally. It was 2 degrees at 2 a.m. in our part of the world today. Even when you’re used to it as us Wisconsinites are, weather this brisk still has a way of taking your breath away. 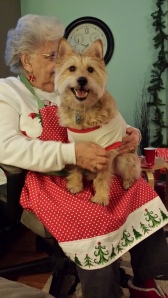 But then again, so does this emotion that seems to overwhelm all members of my forever family at this special time called Christmas. Love. From the ground up, it is all around this time of year. I know because I show it in my extra cuddles. And my doggie kisses. And my tail wags. I share it in every way I know how. And it inevitably comes back to me in droves. It seems to be another one of those emotions that comes alive in its contagiousness.

And it’s not really something we even think about. Real love does. It radiates from us in everything we do, and in doing so creates a distinctive warmth that is sure to spread to the next person ready to receive its glow. Real love is. It becomes us to the point where we aren’t sure which came first – the love of the giver or the receiver.

It was 2 p.m. when things came full circle in my heart. I welcomed mom’s side of the family into my forever home for an afternoon and evening of joy and love. Sure, there were presents. And pretty ribbons. And treats. But none of that mattered as much as the love I felt in the room. At 9 degrees, it was still incredibly brisk outside. But that was outside. Inside it was warm, not just from the heat we are blessed to have but through the love in the air. Tonight I rest easy because (as Frank Sinatra croons in the age-old Christmas carol) I’ve got my love to keep me warm. 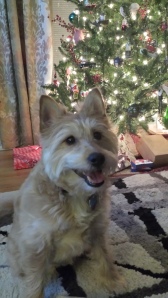 Sleigh bells ring. Are you listening? I haven’t caught mom listening to Christmas music in a while, but occasionally I hear the sleigh bells ringing anyway. I close my eyes and I can smell freshly baked pumpkin pie (which I do occasionally get to sample). I can hear Christmas carols. I can see everyone gathering around the Christmas tree to open presents. The smiles each of these things ignite are presents in themselves.

My eyes were opened to it today when my forever mom and dad and I were playing one of my favorite games. Simply put, its a game of give and take. Its one of very few things I remember learning from my birth mom before I got separated from her. I was instructed to give an object to one of my brothers, they were instructed to give it back to me, and then I could play. It was like I was getting permission to take whatever object it was I wanted. And ultimately, I gave to receive.

To this day, I give Mrs. Prickles and all my other toys to mom and she gives it back to me and at that point I nurse on it, lay on it, or (only every once in a while) rip it to shreds. It is a habit that I don’t see changing any time soon, because I think the action itself is sound. Employing the balance of give and take is not such a bad thing, after all. But as my thoughts drifted back to the true joy of Christmas, I realized the logic behind the behavior is completely backward. I give to receive? I don’t think so. 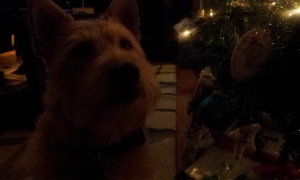 To read about when I caught my silly mom listening to Christmas music in June: http://wileyschmidt.com/2013/06/01/joy-to-the-world/comment-page-1/