I certainly didn’t want to be the one to say it. Which is a good thing because I physically can’t. But dad can. Yet I know he never would even if maybe he should. Or maybe he would and just has opted not to. Yet.

Well today fate intervened. It made it possible for neither of us to say the thing we’ve both been thinking but couldn’t say. Mom’s wardrobe needed a boost. There, now I’ve officially said it. And please don’t misunderstand – I mean no disrespect. My dear forever mom has always been trendy as far as I can tell. I have absolutely no expertise in the area of people fashion, but I know she generally kept up with the trends. 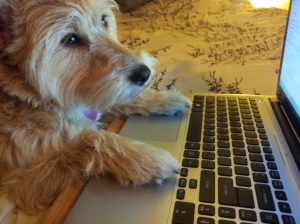 I find it the slightest bit infuriating since I know how quickly he is growing out of things, but I digress. Because today fate intervened. My mom had a friend over to spend some time with baby Carter, and that friend came bearing gifts. I could tell she didn’t think they were anything special. But to my mom they were gold. All kinds of beautiful sweaters and shirts that I know she never would have bought for herself under our current circumstances.

They were headed for a donation to the thrift store, but instead ended up in mom’s closet. She took every one, and she seems downright giddy about it. All of this made me realize when it comes to people fashion I know nothing. And that’s okay.

Because today I saw what matters. I didn’t want to be the one to say it. And neither did dad. But now, because of the generosity of a friend, we don’t have to. And maybe we won’t have to worry about it again. Because I think mom got another present along with the recycled clothes today.

I think she realized its important not to lose yourself. And, perhaps more importantly, it’s okay if you do every now and then. Because these things have a way of working themselves out. God will provide, as they say. And – in so many ways – they are right.

I’m glad I am a boy. And a dog. I’ve got it easy when it comes to so many things. I don’t have to worry about money, or a food source, or whether or not I’m loved. My people take care of all of that. And the whole appearance thing is so easy for me. The inside matches the outside. I’m all heart, and I work with what I’ve got. And I like it. It’s as simple as that.

That couldn’t be farther from the way it works for the two-legged women in my life. The ones I see on the television are always altering the way they look with hair products and makeup and clothes and diet plans. So many diet plans and fitness commercials air this time of year, no doubt targeting those who made New Year’s resolutions to lose weight. The ones I see in real life aren’t all that different from those on the television, who (for some reason I still don’t understand) they seem to try desperately hard to imitate.

But it gets worse. I apologize in advance for the blanket statement, but the way I see it too many women want what they can’t have. Skinny women want to be skinnier. Curly-haired women want straight hair. Small chested women want a bigger chest (and vice versa). It’s madness.

I got to thinking of this today when I noticed a new kind of joy in my life. Just one you (JOY) appears frequently on labels baby Carter’s clothes. At first I thought nothing of it, but today it got me to thinking. Indeed there is only one baby Carter. And I am thankful for that. He is uniquely him and that is just as it should be.

The same can be said for the women in my life. There is just one of you, and instead of changing it with all kinds of hair products and diet plans, you should be embraced. I’m glad I’m a boy. And a dog. Because I can spend all that time I’m not worrying about unnecessary self improvement on reminding the women in my life how special they are. Joy. From the ground up, it is found on the inside not the outside.