Apparently it’s normal. But I’m not going to lie, it is kind of freaking me out. I haven’t seen mom cry this much (this randomly) since the last time we watched Marley and Me. Which, coincidentally was today. (Probably not the best idea, given her tender emotional state).

I’m just glad it doesn’t seem to involve me. Or at least it didn’t, until I involved myself. She was crying tonight (for what seems like the millionth time in the last 48 hours) as she rocked baby Carter to sleep because it’s the last time she will do so on a weeknight before she’s working again. It seems a silly reason to me, since it will clearly not be the last time she rocks my dear little person to sleep. But its all going to be different now, she told dad.

It has definitely become one of those lose-lose situations for dad and I, since neither of us can seem to say or do anything to help. So he did what he does best and gave her a hug and a kiss on the forehead and told her we have a lifetime of nights like this ahead of us. Which made her cry more. So I did what I do best and shoved my way into the love fest. Which made her cry more. You see? Lose-lose situation.

But as I thought more about it, it’s not so much the situation itself that seems to be causing these emotions. It’s the thought of transition. The fear of the unknown. I know it all too well. As a family we have been in flux for some time now waiting for the baby to arrive and living through the first precious months, and now moving on with life involves a different kind of change. Transition. From the ground up, it can be a pretty scary thing.

It reminds me a bit of the situation in our backyard right now. As much as I love snow, I cannot stand what it looks like in transition. It’s sloppy and goopy and (worst of all) an awful dreary mixture of gray and brown. A sea of gray. Not to mention the stuff underneath that apparently used to be grass. Now it just looks like mushy brown death.

Just as this is a normal occurrence, apparently this emotional struggle mom is encountering is also fairly common. But here’s the important thing. Eventually all of the gray snow melts away. The grass doesn’t stay brown and sloppy forever. In just a few weeks time, it will be vibrant and beautiful again. My backyard paradise will be restored. The same can be said for this time we are in right now – it’s messy and emotional and that’s okay. Because I know in my heart these fears will be brought to purpose and the sun will shine again.

I dropped the ball today. It was kind of like that movie scene where you see what’s coming before it happened. I saw it and then it happened. One minute Carter and I were lounging together comfortably. The next he was rolling.

It’s my doggie understanding that rolling behavior from a seven-week-old baby is normally something to be celebrated. Its something of a developmental marker the doctors tell new parents to monitor. Except when it happens like this. 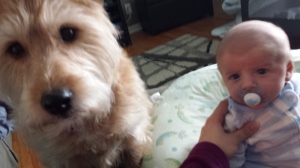 We were on the ottoman together. And then we weren’t. I saw it and then I heard it. The pain cry, as mom has come to call it. Usually it happens when he accidentally scratches his face or something. This was different. Mom was coming back from the bathroom when it happened.

And in that moment I think we both felt like failures. Me, because I couldn’t stop the inevitable from happening. Mom, because she took her eyes off the situation in time of need. So she swooped him up and I was at the ready to do whatever I needed to do to help. I stayed underfoot (a place I can’t say I was entirely welcome in this situation) as mom paced and swayed with him and called the doctor.

My mind raced hopelessly with all of the most terrible of outcomes. My heart skipped a beat when he stopped crying a few minutes later. In a complete emotional frenzy, I kissed him all over just as soon as it was physically possible to do so. And then came a very powerful message from the doctor’s office.

It’s a powerful message to be sure, yet I think we all need to hear it from time to time. Sometimes we don’t even know how badly we need to hear it until we hear the words out loud. Until we release the breath we didn’t realize we’d been holding. But that’s only the first part of the puzzle.

The second is in believing it. These things happen sometimes. It’s like those movie scenes when you see what’s coming before it happens. And then it does. In this case the scene that follows is looking good – there don’t seem to be any warning signs that the fall had any negative impact whatsoever. So for now we have no choice. When all else fails we need to believe everything’s going to be all right.