I’ll never know what it’s like. Not because I don’t want to, because I do. I just can’t. I know, it’s not the usual for me, your resident doggie optim 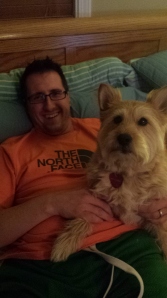 ist to say I can’t do something. But this is one of those things I honestly can’t do regardless of my feelings on the matter.

Because at some point along the line, I had an operation that will forever keep me from ever knowing what it’s like to be a dad. I didn’t have a choice at the time, it was just one of those things that happened at the humane society. Given all of the other good things that happened to me there, I know it was probably for the best. But I do occasionally wonder what it would be like to be a dad.

Especially on a day like today when all of the people in my homeland celebrate dads. Today is Father’s Day in America, and it was a pretty special one around here since it was a first for my forever dad. Sure, mom and I have always conspired to do something to commemorate the day as he is my forever dad. But this is different because little baby Carter is in the picture now.

So it made sense to me that we packed up the car (my first car ride in the new ride, and it was great) and head to grandma’s house to meet up with other dads in the family. Seeing these men together, three generations of dads, really got me to thinking about what it means to me to have such a great dad to call my own. He loves me. He plays with me. He makes a special effort to pay extra attention to me since baby Carter was born. He’s my buddy. He’s my friend. He’s my forever dad. I am so blessed.

It does sometimes bother me that I will never know what it’s like to be a dad. But I do know how to be a son to a caring, loving, loyal man. That is his living legacy. And that will always be enough for me.

I know when it’s real. I know when it’s fake. There is something in a person’s spirit that gives it away to a keen canine eye. The smile. Maybe it’s because we canines smile with our tails, but why anyone fakes it I will never understand.

But my lack of understanding of this basic human behavior does not (in itself) make it cease to exist. Quite the opposite in fact. As a regular observer of people, I know this fake smile happens all the time for any number of reasons. A need to impress. A need to console. A need to end a conversation so you can go to the bathroom.

Regardless of the why, I find it most unusual because most receivers of the fake smile know that’s what they’re getting. They’re not stupid. Life has taught me that most people are much less mysterious than they think they are. And the fake smile is no good for the giver or the receiver. It puts the person faking it in a position to act instead of live his or her true feelings. It puts the receiver in a position where they feel like they said the wrong thing, put the person out, or are wasting the person’s time.

I know I don’t speak for everyone when I say this, but that hasn’t held me back before and will not hold me back now. Just be real. I’d rather hear the truth than see a fake smile. Give it to me as it is, as Dido sings in “Let Us Move On,” even if it sucks. Life is messy sometimes. Live it. Chances are you will feel better for living it, and the person will feel better for his or her (albeit incredibly small) part they played in your overall well-being.

Because I’m not the only one who knows when its real or fake. A lot of people do too. The smile. I just don’t understand why anyone would fake it. In my little doggie eyes, it’s a sacred expression of joy that shouldn’t be wasted for reasons we can’t explain. “Honesty is the first chapter of the book of wisdom,” as American president Thomas Jefferson suggested. And an honest smile starts in the heart. Now if only I could get my paws on a copy of that book.

I blame my fairly parent-free puppyhood. My dad left my mom before I met him, and I lost my mom way too early. But that doesn’t excuse my selfish thinking lately. We canines love unconditionally and selflessly after all. Hard as it may be to admit, everything is not about me. There’s a nervous energy in the Schmidt home lately. It makes sense, with a baby on the way and all. But I realized today we have more than that in common. I’ve been pretty selfish, haven’t I?

I’ve been going about this (soon-to-be) big brother gig all wrong. I’ve been so worried about being a good big brother I didn’t think twice about how my people must be feeling about becoming parents. Parents. Yes, that is definitely a bigger deal than being a brother. Sure, all parts make a family whole. But being parents is one of life’s most excitingly terrifying miracles.

This all became startlingly obvious to me today when my parents were agreeing how much they miss biking together this summer. My regularly accident-prone mom is playing it safe staying away from the two-wheel balancing beam just in case her evolving center of gravity should befall her. And I noticed nerves in their conversation that I’ve been seeing a lot more of lately.

I wished I could jump in to remind them my mom didn’t learn how to ride a bicycle until her 27th birthday. It’s not really my confession to make, but I don’t think she’d mind. She grew up like any other child in every other way, but riding a bike was not part of her particular childhood story. I remember the day well.

She and dad came home with an air of excitement us dogs can sense in less obvious things like racing heartbeats and quicker breathing patterns. With them they brought a contraption I learned later was called a bicycle. I didn’t care for this new toy as it seemed to have a directly inverse relationship to my walks around the neighborhood. Instead of taking a walk with me, she would go off on a bike ride with dad.

Bike rides aren’t like car rides. No dogs are allowed on bike rides. But it seemed to bring them both joy, so I gradually let my feelings of disdain subside. Now it’s time to do the same with my nerves about being a big brother.

Because I saw it again today. Mom is already mothering the baby by staying away from something she enjoys that could put him or her in danger. Dad was an excellent (and incredibly patient) teacher with mom learning to ride a bike. Instead of catching the nervous contagion, I should be focusing my energy on reinforcing for my forever family the truth. They’ve already been parents. For three years, they’ve been the best parents a doggie could ask for. I don’t know what they’re so nervous about.