It smelled like garbage. Again. And I loved it. Again. I think that is (at least one of the reasons) why I love garbage so much to this day (much to the chagrin of my forever people). I like it because it is an homage to where I came from. I love it because it reminds me of home.

I’ve carried each of these constants with me long after getting separated from my mom and brothers all of those years ago. It came to mind today when I (accidentally?) knocked over the overflowing garbage can in the kitchen. It was the second time I’ve done this recently, but it’s not my fault there were remnants of sausage and pepperoni pizza inside. My nose made me do it. 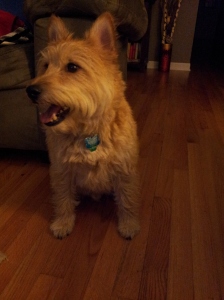 Reasons aside, my mom was certainly displeased as she hustled around to clean up the resulting mess on the kitchen floor. I’ve found there is a great misunderstanding between canines and people about what is considered garbage. It’s a lesson I’ve learned many times over and yet can’t seem to remember in moments when my nose takes over.

So it’s a good thing I know evasive maneuvers to correct these situations. I kept my distance from mom until making my move a couple hours later. I needed to show her I was sorry for making her upset (not so much for the garbage scavenger hunt). Unbeknownst to him, I enlisted baby Carter in my mission. He and I have been doing this thing lately where he lets me lick his head. I can’t explain it. For some reason its something my people and I share – this almost instinctual desire to smell his head. For mom it stops there. Not for me. He needs to know I love him, I tell myself. And so begins the love fest.

It’s been happening more frequently lately, but something new happened today. He pet me while I licked him and said hi to me. Well all right, it was more of a gurgle. And I’m pretty sure he pet me on accident. But it made my heart smile. And (better yet) it made mom happy. I think she was so happy in that moment she forgot about how upset she was about the mess. That is what true joy should do.

In that moment I realized I can get away with knocking over the garbage every now and then. Because we’re going to make a good team, Carter and I. Just call us the joy brigade.

It didn’t end well. This afternoon I decided I was going to do something I’ve never done before. I’ve been plotting it for quite some time, but never had the guts to follow through. I’m not sure what it was in my mind that finally convinced me to do it. All I know is it happened. And the rest is history.

I knocked down the garbage can in the kitchen today. It smelled like ham and apples and cheese and rice and beans and corn and peas. I love peas. I don’t know what came over me. All of a sudden, I was overcome with this urge to get in there and pick out all of that goodness for myself. I never understand how my forever people can throw such gems away. I cringe when I see leftover bacon or any kind of bones go in there. Enough is enough, I thought to myself. 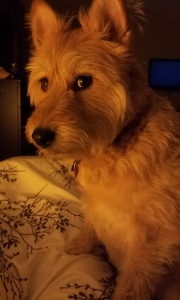 It was quite the feast, and I ate everything in a matter of minutes. Next came the aftermath. Not only was I in (really big) trouble, but I paid for it. Apparently garbage is garbage for a reason. It’s not good anymore. I’m not generally a trouble maker, so getting scolded was almost as bad as the tummy ache that followed. Almost.

I certainly learned my lesson. (At least until my nose overtakes my mind again). Philosophically speaking, I am still a believer in the theory that one person’s trash is another person’s treasure. But when it comes to that garbage, it is a lesson I already knew. I just didn’t realize it. My instincts told me my people would not keep treasure from me on purpose. In the back of my mind, I knew there must have been a reason for every single time I’ve made a pass at the garbage can in the past, I was scolded.

I should have known I could trust my instincts. I thought my nose knew better. I was wrong. And it didn’t end well

“I decided that it was not wisdom that enabled poets to write their poetry,” suggested Ancient Greek philosopher Socrates, “but a kind of instinct or inspiration, such as you find in seers and prophets who deliver all their sublime messages without knowing in the least what they mean.”

There is obviously no poetry in garbage. But there is wisdom in knowing the value of instinct. That is the lesson I learned today.

Today the garbage in my forever home smells like a combination of pizza crusts, discarded stale bread, and onions. And I love it. I often gaze at it longingly, just dying to attack. To knock it over and feast on all the fabulously delicious samples inside. Sometimes I even get close enough to make my (albeit naughty) feasting fantasy come true. But I’ve never actually gone through with my malicious plan. Partially because I will admit I do eat a pretty well-balanced diet of dog food, treats, rawhides and people-approved people food throughout the day. Mostly because I don’t want to get scolded. 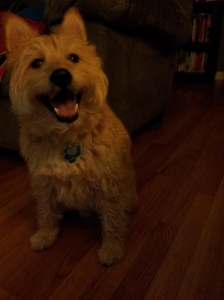 So you can imagine my confusion when my mom returns from a store called Goodwill every now and then with a variety of second-hand items. I can’t say she ever needs any of it (just as I don’t need more food), but I get the impression there’s a sense of fulfillment in finding treasures in someone else’s trash. And I can’t fault her for that.

I didn’t get into the garbage today. I don’t plan to do so any time soon either. But all this gets me to thinking about something pretty powerful. Finding treasures in someone else’s trash. Recycling it. Giving it new life. I am fortunate enough to say this has actually happened to me firsthand when my forever people found me at the Oshkosh Humane Society.

I was a diamond in the rough. The staff at the shelter were very protective of me since I had already been adopted and returned once before. I was deemed a “problem puppy.” I heard tell more than one person to “look past the cute and see the commitment” it would take to bring me home. Yet my people found me, believed in me, and the rest is history.

I don’t mean to glamorize garbage. Because let’s face it – it does stink. But (in one way or another) we all have it. Junk. Garbage that we might deem to stinky to properly address. Probably not in the form of pizza crusts and onions, but perhaps in our closets. Or maybe even in our hearts. Both literally and figuratively, we have the ability not just to find treasures in someone else’s trash, but in our own.

Just as I was recycled, I continue to recycle myself on a daily basis. It’s a choice I make in seeing the good in all people, places and things around me regardless of the junk I encountered in my past. It’s not always easy. It might even stink from time to time. But at its very core it’s joy from the ground up.

The great and infamous “they” say one person’s garbage is another person’s treasure. Well, us canines are masters at making treasure out of life’s most unusual garbage. While some of us are more subtle about it than others, we canines do some pretty good treasure hunting. From garbage cans to discarded Kleenexes, we have a gift of finding gold in the most unusual of places. 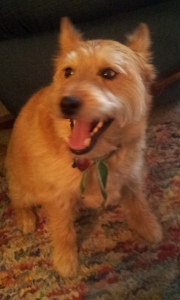 I got to thinking about this earlier today when laying on the bathroom blanket my people refer to as a bathmat. (I’m so blessed to have people so considerate to lay down this thing called a bathmat specifically for me because the bathroom floor tiles are chilly. I’m sure it has nothing to do with keeping the water off the tiles.) Every morning the Schmidt bathroom offers a myriad of scents and aromas I can’t say I appreciate.

Lotions and potions and perfumes, oh my! It is so confusing to me why my people try to hard to mask their natural (in my opinion beautiful) smell. In the shower they go: body wash, rinse, shampoo, rinse, conditioner, rinse.  Then after the shower, there’s lotions and perfumes (or colognes) and deodorant. It’s exhausting to me.

Why not find treasure in the garbage? Why not embrace one’s natural scent rather than masking it with various lotions and perfumes? I wish I could explain to my people that is why I obsessively roll around in clean clothes and dirty towels. They don’t smell like home. Call me crazy, but I love the natural smell of all my loved ones. Dogs and people alike, I prefer them in their most natural form.

“You can’t depend on your eyes when your imagination is out of focus,” said American author Mark Twain. My eyes, nose, and imagination are finely tuned, if I do say so myself. To me, another person’s garbage is only an imaginative thought away from being my treasure.