It sounds incredibly exciting. But also a little terrifying. Today my people packed up dear baby Carter early this morning and did not return until late this evening. All to spend time with four girlfriends mom hasn’t seen in almost three years. And their families. That meant that in addition to the adults in the group, there were six babies three and under. That is a whole lot of babies, all on their own version of the eat, wake, sleep schedule. Six babies crying, laughing, giggling, and putting things in their mouths. Six babies crawling, running, sitting and standing. Life. From the ground up, that is what filled that three-bedroom condo at a resort in a town called Wisconsin Dells.

But also there were the four girls who started it all. Since their time together causing all sorts of mischief in college, they’ve gotten married and spread out all over the Midwestern United States. And now they are all moms. I wish I could have seen it. (Then I remember all the potential hair pulling involved with that particular age group of little people and I can’t help but feel pretty grateful I stayed home and got a few visits from aunt Morgan and her pup Joey). So instead I relived it through the stories mom and dad recalled as they relived the days events when they got home. There were two things I picked up from this conversation.

Each of these friends have their own unique way of things that makes them fabulous mothers. It just goes to show how wrong those books can be because (at least from what I can tell) there is no rule book on how to be a good parent. Sure, there is a whole section at libraries and book stores on all things babies, parenting, and child rearing. But I hold the belief that these little people have a way of writing their own rule books. And their mommas have a way of translating them. It’s a truly awe inspiringly beautiful thing.

The best part is how four girls who have become such uniquely different characters as women still make time for each other. They may only get together once a year, but they talk via email and on the phone whenever they can. They are busy (re: the aforementioned six children) ladies with a lot of different things in the air. But they make time for each other. It’s a priority.

“Sometimes being a friend means mastering the art of timing,” suggested American writer Octavia Butler. That is what today was for my mom and her friends. It was exciting and a little bit terrifying. But that’s friendship. That’s life. From the ground up, today was a celebration of these most simple of truths. 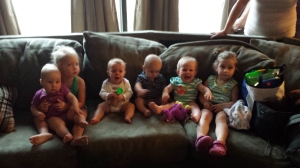