It happens all the time. Sometimes several times a day. To be honest, it happens so frequently, I could very easily find myself taking it for granted. In reality I know that is the absolute worst thing I could do. 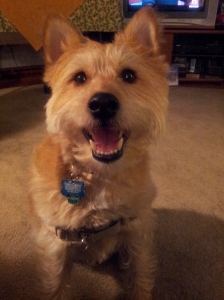 That’s why when it happened today, I paused. I took it in. I wrapped my heart around it so tightly in an effort to remind myself how special the words actually are.

“I love you so much, Wiley. Do you know that?” These are words mom says to me pretty often, and rarely do the words include one sentence without the other. The statement and the question. I used to think it was kind of silly of her to ask a question with such an obvious answer, but time has taught me not to be curious about such things. It is what it is, and for that I am thankful.

She’s taken to saying it to dear baby Carter as well, which I found some irony in as I thought about it this afternoon. Because neither he nor I can say it back. I know soon he will be talking up an intelligible storm, but that has yet to come to fruition. And I have nothing by my nonverbal arsenal to show her the obvious truth that I not only know her words as truth, but adamantly return the sentiment.

I know this as certain as I know she doesn’t need an answer to her question. She asks it all the time. But I will never (ever) take that for granted. In my book, a person can’t say they love another person enough.

A dog can’t show their unconditional love for their people in enough different ways. Maybe it’s because I know what it’s like to not hear it enough (or ever). Or maybe it’s because I’m not getting any younger and feel the need to embrace it each time I hear it. Either way, it’s okay with me.
Comments (4)