I honestly couldn’t handle it. I saw it happen. I heard the sound when it happened. And I knew crying would come next. So I did the cowardly thing and ran away to hide in the bedroom, because I just couldn’t stand to even find out what the aftermath of all that action was.

I guess I shouldn’t have been surprised. My dear baby Carter was all over the place today, climbing things not meant to be climbed, ripping any form of paper he could get his hands on and running. So much running. 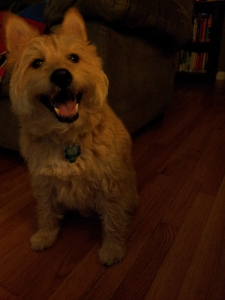 All of that came to a screeching halt when he was attempting to dismount one of his toys and take off in a full run in one fell swoop. He failed, whacking his head on the hardwood floor pretty good in the process. In the realm of his cries (I’ve come to know them all), it surprised me that this one seemed fairly well under control. And it honestly didn’t last nearly as long as I had thought it would.

I found out later he was also gushing blood from his mouth, where his fairly new set of teeth tore into his top and bottom lip. So you can imagine my surprise when the crying stopped a few minutes after it started. The terrible sound was replaced with the happy toddler babble that preceded the fall. That was a relief enough that I returned to the scene of the crime to check it out. All was well.

But in those moments after it happened, I ran. Mom couldn’t run. I know she was scared, and seeing the blood must have been terrible. I heard her and dad recapping what happened over dinner, and in that moment I felt a gush of pride over the parents they have become.

They both hated that it happened at all. And it was scary (especially for mom). Yet ultimately, they both realized it was probably way worse for them than it was for him. They don’t want anything bad to ever happen to their little boy. Obviously. In spite of all their best efforts, they were reminded today that it’s going to happen. He is going to fall down. And he’s going to get hurt. But it’s okay.

Because it’s getting back up that matters.