Sleep is a close friend of mine. We’ve basically been best friends forever since day one. I’m sure my schedule in a day consists of no more beauty sleep than the average canine. There’s the early morning and mid-morning naps, followed by the early afternoon and mid-afternoon naps. Usually there’s a late afternoon and evening nap too before it’s finally time for one of my absolute favorite times of the day – bedtime.

An outsider might see this as a waste of time. I see it as the opposite. I do a lot of deep thinking and dreaming big in my sleep. I also usually have one ear open to the world. It’s a trick I learned during my time at the Oshkosh Humane Society that I have perfected over the years. Listening. From the ground up, it’s one of many reasons why we dogs are known as man’s best friend. We listen when we’re asleep. We listen when we’re awake. And when I say we listen, we really listen. 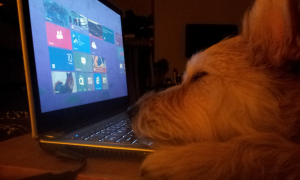 We are present in a way I can’t say all people are, at least from what I’ve observed. I say this with a soft kindness in my heart, because I know it is a skill that takes practice, and not everyone has had the practice necessary to be a good listener. It helps that we can’t talk back, obviously, but it’s more than that. We might not understand all the words that well, but we read emotion like champions.

So I couldn’t help but giggle mentally when I found a scrap of paper dear baby Carter threw on the ground while my forever family ate dinner. According to mom it was something called a fortune from a Chinese cookie. It bothers me that I don’t know who to attribute the quote to (other than to say it was once inside a fortune cookie), but the words stuck with me. “Anyone can hear, but a wise man listens,” the paper read.

Anyone can hear, but a wise man listens. The subtle message in the words is one with which I resonate deeply. I aspire to be wise, which I understand means making wise decisions. Some might argue I’m choosing poorly spending so much time sleeping. I would argue first that I always have one ear open. But more importantly, I would defend myself with the simple truth. I’m resting up.

To be a good dog. To be a good listener. To be a good friend to my people. And it’s because of these things I know there’s a purpose behind everything in life if you chose to listen instead of hear.