It’s a pretty morbid thought in my opinion. Yet it’s something that dear baby Carter seems to get behind, so I guess I can give it the benefit of the doubt.

Every time he hears this song, his reaction is the same. Whether he is in his high chair or running down the hallway or trying (and failing) to climb the stairs, he stops cold and starts bouncing around like a ninny. 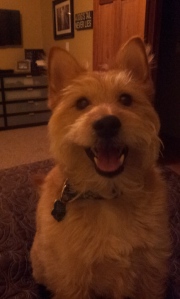 It’s called “Live Like We’re Dying,” and in it Kris Allen suggests making the most of every moment since we never know when it might be our last. And my dear innocent 14-month-old Carter loves all three minutes and forty-three seconds of it.

“So if your life flashed before you, what would you wish you would’ve done?” the song asks. “Yeah, we gotta start looking at the hands of the time we’ve been given. If this is all we got and we gotta start thinking if every second counts on a clock that’s ticking, gotta live like we’re dying.”

I will admit to liking the message, but the context bothers me every time. No one is dying. We’re too busy living.
At least that’s how I felt until it happened tonight. Right there, amid the relaxing routine of Carter’s bedtime, I heard the most beautiful thing. Laughter. From the ground up, all three of my beloved forever people were laughing hysterically. And it made my heart smile.
From what I could tell, mom was making a blowing noise on Carters belly, causing him to laugh longer and with more vigor than I have ever heard from him in his short life. The result was laughter from mom and dad. It went on like that for five precious minutes before Carter remembered he was tired and it was time to go to sleep.
But the length of time didn’t matter. Because in those minutes the laughter brought with it an understanding that it doesn’t matter that no one is dying. It’s that every second counts. The way I see it now, that’s the real point of the song.
That must be why Carter stops cold every time he hears it. It’s not because someone is dying. It’s because we’re too busy living.
Comments (1)

It happens all the time. Sometimes several times a day. To be honest, it happens so frequently, I could very easily find myself taking it for granted. In reality I know that is the absolute worst thing I could do.

That’s why when it happened today, I paused. I took it in. I wrapped my heart around it so tightly in an effort to remind myself how special the words actually are.

“I love you so much, Wiley. Do you know that?” These are words mom says to me pretty often, and rarely do the words include one sentence without the other. The statement and the question. I used to think it was kind of silly of her to ask a question with such an obvious answer, but time has taught me not to be curious about such things. It is what it is, and for that I am thankful.

She’s taken to saying it to dear baby Carter as well, which I found some irony in as I thought about it this afternoon. Because neither he nor I can say it back. I know soon he will be talking up an intelligible storm, but that has yet to come to fruition. And I have nothing by my nonverbal arsenal to show her the obvious truth that I not only know her words as truth, but adamantly return the sentiment.

I know this as certain as I know she doesn’t need an answer to her question. She asks it all the time. But I will never (ever) take that for granted. In my book, a person can’t say they love another person enough.

A dog can’t show their unconditional love for their people in enough different ways. Maybe it’s because I know what it’s like to not hear it enough (or ever). Or maybe it’s because I’m not getting any younger and feel the need to embrace it each time I hear it. Either way, it’s okay with me.
Comments (4)

I thought it was a terribly stupid idea. I’ll be honest and come right out and say that. In doing so, I’ll stand by dad on what mom insisted was the wrong side of the fence. Because to us it was a no-brainer. Today we had the first significant snow event of the winter and I know the havoc that wreaks on people.

Not necessarily the people I love, but people in general completely forget how to drive for the first few snow storms each year. Accidents clutter the freeways, cars fill the ditches, and sirens seem to run almost as rigorously as the snow plows and salt trucks. 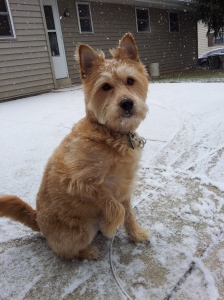 That’s why tonight was not a good time for people to come over to my forever home. Obviously mom did not know when she planned an event she referred to as “Friends-giving” that mother nature herself would try to put a damper on an otherwise festive evening. Nonetheless, she could have called it off several times on account of the weather, as dad and I thought she should.

She suggested it, sure. A couple of times. But no one agreed to postpone a dinner they had looked forward to since it was finalized on the schedule several weeks ago. Friends-giving was on, snow or no snow. And as it turned out I may have been wrong on this one.

There was turkey and potatoes and vegetables and rolls and all kinds of other goodness (which means there were table scraps for me). There was love, which has its way of seeping through all the concern about the weather. And there was joy. From the ground up, Friends-giving brought joy to life tonight.

As the night drew to a close and a few of mom’s dearest and closest friends packed up to leave, I knew for sure I hadn’t misjudged the situation. It’s never easy for me to admit wrongdoing, but I have decided not to budge on this one. Because I know dad and I were right. It was dangerous what they did tonight, braving the storm to come together. Yet that’s exactly what they did. They came together. And it was worth it. Everyone traveled safely after sharing a delicious meal with great people.

“It is one of the blessings of old friends that you can afford to be stupid with them,” suggested transcendentalist thinker Ralph Waldo Emerson.

As we celebrate a holiday about pausing to count our blessings, I’ve paused tonight to count mine. What my dear mom (and her friends) did tonight was stupid, but I guess it’s okay to be stupid sometimes. Because they were in it together. And their hearts were in the right place. I suppose that’s what friendship is all about.

There’s a simple truth I’ve come to know as an observer of people. It almost never takes as long for a person to break down as it does to recover.

The same can be said for dogs, but usually its with little unimportant things. Like tonight when I uncharacteristically tore apart a beloved member of my comfort circle. My dear Angry Bird toy is no more after I ripped it apart beyond repair. There was no good reason for it, but that’s not actually important to the story. 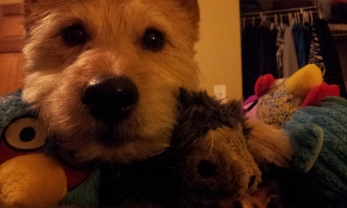 I think with people it’s frequently less than that. A lot less. Sure, it could also be longer, but regardless of how long it takes there is something I know for sure. It never takes as long for something, or someone, to completely break down as it does to put the pieces back together.

A mom goes to the grocery store for something silly she thinks she needs for a recipe on a cold, rainy night and never comes home to finish what she started. An unsuspecting person goes to a doctor for a checkup and leaves with the kind of news that no one ever wants to hear. A curious little boy burns his hands beyond repair investigating the inside of an open oven. These are things that can happen, and at a moment’s notice change absolutely everything. Not just for one person but for everyone that person knows.

Life can change in an instant, a day, or over time, but more often than not putting it back together again, moving on, starting over? These things can take time. And frequently they do. A lot of time.

But there’s a simple truth I’ve come to learn as an observer of people. You can’t rush it. Rushing the recovery process never helps the situation. Though it might not seem fair given the amount of time it takes (or doesn’t take) for life to change, I think it’s that way for a reason.