Nothing went wrong. Nothing spectacular happened either. It was pretty much your average day around the Schmidt house today. Dad went to that place called work. Mom cared for dear baby Carter when she wasn’t working. Carter was in good spirits. All was well around here.

So when it happened this afternoon, it brought an unexpected smile to my heart.

Carter has taken to spending time with dad when he gets home from work. It’s like he’s soaking up all the dad time he can, since he doesn’t see him as much as mom and I. Today was no exception, as he clung to dad while mom finished making dinner. That’s when that magic thing happened again. To me there is really other logical explanation for the emotional vacation the spirit takes when a good song makes an appearance in one’s day. Music. From the ground up, it touches the soul in a way words alone cannot.

Please let me preface this by saying dad, in general, is not a giggly person. And he doesn’t particularly care for dancing. But when One Republic’s “Good Life” came on the radio as mom was cooking and dad was holding Carter, what happened next really was its own slice of goofiness. I think dad thought mom wouldn’t see, but she has a way of noticing these kinds of things. Namely, she could hear both dad and Carter giggling like ninnies, so there was no way she wasn’t going to investigate the cause.

The scene in the living room was one that would have brought a smile to anyone’s heart. There dad was, with Carter, dancing around like a ninny to a song about living a good life. “When you’re happy like a fool, let it take you over,” Ryan Tedder sings. “When everything is out, you gotta take it in.”

That is exactly what mom and I did in that moment. As dad was happy like a fool, we took it in. And, in doing so, we were happy little fools too.

Today was just another day. Nothing went wrong. Nothing spectacular happened. It was definitely a pretty average day around the Schmidt house. That is, until that moment, when joy came alive at the hand of music and reminded us we are, indeed, living the good life.

I don’t particularly care for baths. All right, I’ll be honest. I kind of hate them. Us canines make a living from defining our territory, which can best be accomplished by finding unique ways to deposit our unique doggie smell wherever possible. I can’t say I’ve ever done it around dear baby Carter, though, since he seems to find his own unique ways of doing everything. 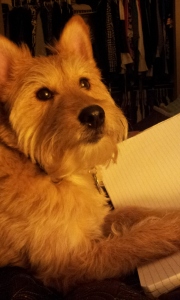 Bath time, for example, is quite the experience in itself. Yet it’s not, because it’s part of our daily life around here. Today, as it was happening the same old way at the same old time, I realized how happy the whole experience makes dear baby Carter. He was kicking and splashing and happy as ever. And today I realized why that is.

He is over it. Literally and figuratively speaking, my dear six-month-old baby pal is over the whole water thing. He’s comfortable floating around in it (otherwise known as his baby bath tub or swim toy). Okay, I’ll be honest, it made me nervous at first too, seeing my dear little two-legged pal floating around at his tender age. Then I watched, amazed, as he was not only okay with it, but he was thriving. He was happy. And his happiness (as usual) was contagious.

It reminded me of a song I’ve heard frequently on the radio. Not the one about pennies from heaven (which would also be appreciated), but the ones about counting stars. It is a song by One Republic I can’t say is incredibly relatable other than that its words touch hearts on a daily basis. Instead of counting money, one of their songs encourages the world to count the stars.

So that’s what I did today. Because I don’t particularly care for baths. If I’m being honest, I kind of hate them. But that was until I learned the kind of joy they can  bring to my dear forever people. And (at least from what I can tell) experience tends to at the very least guide one’s opinion on something.

It’s not the first time and it certainly won’t be the last time I break the rules. So today I do this by recognizing how the day and its importance in the past, all-the-while recognizing the importance such things have on our future. If today taught me something it would be not to count anything other than stars. Ultimately the stars in the sky help us give definition to our dreams.

I think it’s magic. To me there is really no other logical explanation. I’ve seen it happen in both my own life and the lives of others on occasions to frequent to count. Music. From the ground up, it touches the soul in a way words alone cannot.

I was reminded of this today when I heard a song by One Republic called “Good Life.” It’s all about the band’s real experiences travelling around the world and their ultimate realization of the good life. And it’s one of those songs that always gets my paws bouncing. It puts listeners into their own good life, just in listening to it.

Which was kind of nice today. Because I’ll be honest. (Not that I’m not always honest, but you know what I mean). Today was not a good day. It was filled with tears and screams and everything negative one could possibly associate with time spent with a baby. Dear little Carter was in rare form today, and the implication was not a good one. Because when he’s that unhappy, mom is unhappy.

And here’s the thing – I know it is because dear little Carter is her baby and she wants him to be okay so it hurts her to see him so unhappy for so long. We are talking two hours of tears long. But she can’t. She can’t fix it. Sometimes there are just things you can’t fix. I think that’s what I learned today.

Because even I couldn’t fix the situation. This is not for lack of trying, mind you. Oh no. I pulled out the big guns. The more Carter screamed, the more mom cried, and the more I attempted to intervene. Attempted is the key word in the story, as I failed to evoke anything but frustration from my beloved forever mom.

Maybe it was because I was even more relentless with my positivity than Carter was with his screaming. It puzzled me at first, since it has always worked in the past. I did this thing where I paw at mom’s leg and sit and stare at her, and paw and stare, and paw and stare, and even jump at her – it did nothing but make matters worse. She just seemed more upset.

Then in happened. Magic. The song came on the radio and somehow the spirits lifted. Joy. From the ground up, it took the form of music today. And (even though it was something other than me causing it) I’m okay with that. Because today I was reminded of a pretty important lesson. The good life isn’t always the easy one. It’s the real one.