It happens at least a couple dozen times a day. I wish I could speak human. And, usually within a minute or two, something reminds me it’s okay I can’t. It’s an endless emotional game I play. Lately it’s gotten worse. The strangest thing about it? There aren’t even words involved. 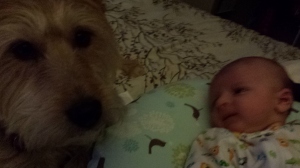 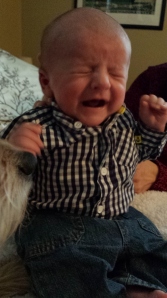 But today I realized something pretty important. It’s his language. It’s all he has right now. All I have is nonverbal communication. All he has is tears. So (when I’m not napping through it) I’ve been attempting to interpret the cries right along with my people. It’s been an interesting check of perspective, as I realize what its like to be so easily misunderstood.

And I wish (right along with my people) on a daily basis that I could translate. Or (better yet) that I could speak baby. But there was a moment today when I realized it’s okay that I can’t. Mom, Carter and I were cuddled up together in a cozy chair with the sun shining on us and I felt it. Love. From the ground up, I felt it through our snuggles. No words (or tears) necessary. And it happened without a translator. Because love is the same in any language.