I already know you’re going to think I’m crazy in saying so. But maybe it will make sense if you just let me explain.

On Tuesday, it was 80 degrees and sunny. There wasn’t a cloud in the sky. Tonight, as I write this, it is 40 degrees and raining. It has been cloudy and cold for the last 48 hours. And (this is where the crazy happens), I am loving every minute of it. This is what we here in Wisconsin are used to, after all. I guess you could say fall has fallen. Hard. But I’m okay with that.

Yes, we had a perpetually terrible winter that lasted well into what should have been spring. It was record-breakingly terrible, with temperatures well below zero more days than not, and snow banks higher than fence lines. Spring was almost non-existent as winter somehow slowly melted its way into an incredibly mild summer. I think there were really only one or two incredibly hot weeks in the mix, and lots (and lots) of rain. 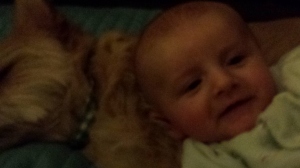 So I know it sounds crazy that I’m so excited to welcome fall with such open (albeit a bit chilly) paws. That is, until you let me explain.

Yes, fall brings colder temperatures and confirms the impending ferocity of winter in Wisconsin. But it brings so many other things along with it. I love the smell of my forever home when mom makes her famous Very Cheery Cherry pie. I dream of the crackling leaves under my paws as my people clean up the backyard. And you can’t beat a brisk twilight walk around the neighborhood as the smell of burning wood resonates in the air. But the best thing of all is the cuddling.

It happened tonight in what might be one of the most special moments between myself, mom and dear baby Carter to date. As you know, Carter is eight-months-old already, and he and I have been going through a bit of a rough patch. I will admit that the fur pulling and screeching sounds he makes as he is figuring out his vocal chords have worn a bit thin. But all of that was forgotten tonight as mom rocked dear baby Carter to sleep.

It was no different than any other night since he’s been born. My people followed the same bedtime routine as always. But tonight, after months of apparent disapproval of the cuddling concept (with only a few exceptions), dear baby Carter cuddled. For a good long while. I found myself so drawn to the simple joy of the moment that I curled up on mom’s (freezing cold bare) feet and stayed there through the duration of the rocking time.

It could have been five minutes. Or it could have been an hour. All I know is that tonight I was incredibly okay with the fact that fall has fallen around here. Because it has brought us only good things so far.

I’m sure it looks different for everyone. In its various forms, the darkness has a way of encompassing us sometimes. Be it in a job we hate. Or a project that never ends. Maybe in a toxic relationship. Or, in the case of this four-legged life lover, the foe otherwise known as winter. It was awfully nasty this year, despite the bundle of joy it delivered into the lives of my family. (Thank goodness for that!)

Seriously though. Between the record low temperatures, and the snow sneezes that kept coming down on us every couple of days, it was a pretty epically horrendous winter in Wisconsin. And that’s coming from someone who knows winter in Wisconsin. Not to mention someone who makes a point of not complaining about things. I seek to find the good in all people, places and things, and all this talk about terrible weather has certainly not been filled with much (if any) of my usual silver-lining perspective.

Until now. Because the other day it was 70 degrees for the first time in seven months. It was gorgeous outside. And I got to spend time reveling in it all with my beloved family in my backyard paradise. That’s when I realized something I guess I’ve always known but never really paid attention to about that light at the end of the tunnel.

It is so very important because it keeps us going. It motivates us to be better. To do better. To live better. Because it’s always there, guiding the way. But maybe more importantly, the wait is always worth it. Sometimes the longer the struggle, the higher the mountain, the darker the times – the more sincere the joy is when you reach the end. When you reach the light.

That’s certainly how I felt the other day as my whole family laughed together and I wagged and they laughed and none of us knew which came first. I know it looks different for everyone. It happens at different times and varying frequencies for all of us. And I don’t think it’s ever the same twice. Except maybe it is in that one crucial way. There is always a light at the end of the tunnel. We just need to focus to see it.

It happens every year. In fall, Wisconsinites dust of hats, mittens, scarves and winter coats when the temperature first falls below 50 degrees. Then, half a year later comes spring and you’d better believe all of those things have been discarded as soon as the temperature reaches a balmy 40 degrees.

I witnessed the insanity first paw today as I watched many of the usual suspects walking through the neighborhood. Dog jackets have long since been discarded, but now almost no people were in coats. In 40 degree weather. I was especially surprised to see this was the case among the fire fighters and emergency response teams who visited down the street today.

They were running into a house a few homes down when I thought of it. Penny. My beloved cat friend (contrary to popular belief it is possible for dogs and cats to get along) from down the road. Though I’m happy she’s likely been keeping toasty warm inside the home she shares with her person Rose, I’ve missed her bushy little face around my front door step all winter. I was just wondering when I might see her again when the first responders came.

That’s when it hit me. Hard. They were going to Penny’s house. Where her person Rose lives. I remember one of the last times I saw Penny before winter went into full swing she mentioned her dear person was having some health problems. My view was limited since it is several houses down the road, but tonight my heart is heavy for Rose and Penny.

So rather than drive myself crazy thinking of possible negative scenarios, I’ve decided instead to flip the coin. To focus on the positive.

It’s an important job those first responders do (even if they aren’t sensible with their outerwear at this time of year). They are there when someone needs them most. They take care of those in need. They save lives. And as I watched them do their magic today I realized how important it is that we all be first responders from time to time. 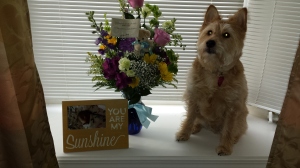 I don’t know what happened down the road today. But I do know this. Today I took an oath to become a first responder in the lives of those around me. Because there is something worth saving in every negative situation.

Everyone was doing it today. Families I’d never seen before. All my neighbor dog buddies. Children of all ages. Entire classes from the school nearby. After what has arguably been one of the very worst winters in recent history, the thermometer broke 50 degrees today for the first time in months. I can honestly say I can’t remember when the weather was so beautiful. And the world around me went outside to enjoy it. All-the-while I watched from my perch in the windowsill.

If the circumstances were different, I would probably have let this fact get me down. I’ve been just as cooped up as they have, I thought, why can’t I get out for a walk today? Oh that’s right. Mom’s knee is injured. Again. Alas, my mission to bring joy to her was back in focus. Just in time for me to realize someone had already stolen the show.

That is until she returned from the doctor with good news. It’s probably only a sprain, according to the doctor, which means everything should be back to normal within a few weeks. No scary surgery. No awful recovery time. And she was given the all clear to carry Carter again without worrying herself to death that her knee might buckle and she could drop him.

All of this is not without its drawbacks, as she will need to rest for the next couple of weeks and shouldn’t try to get up from a chair or rocker while holding Carter. She still shouldn’t be kneeling to give Cater his bath. And, just in time for the weather to finally warm up, she shouldn’t be taking any long walks for a while.

I know everyone else was doing it today. Everyone but me. But that’s okay because it could be a lot worse. And I’ve made it this far through this terrible winter. What’s another couple of weeks? I’m just happy joy has been restored around here. From the ground up, that’s what really matters in my book anyway.

It only costs a dollar. But it is capable of miracles.

The winter blues have claws deeply embedded in the hearts and minds of many in my neck of the woods these days. If it’s not frigidly cold, it’s snowing. If it’s not snowing, it’s frigidly cold. And I am in good company of many Wisconsinites who still find joy in the snow diamonds falling from the sky. But even I can admit it’s been an especially tough winter. I love my backyard paradise, but it is taking a great deal to get me out there recently. 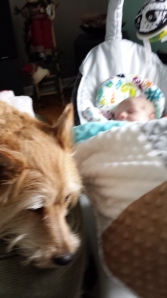 So I find my joy in other things. Snuggle time with Carter. Quiet time in another room when Carter is screaming. And (this is new) time alone with dad. Mom has been spending the majority of her time taking care of Carter (as it should be), which has freed dad up for some quality time with me.

Tonight our quality time involved cooking a special dinner for mom. Since I’ve won more of his affection lately he’s been especially generous with treats of all kinds, so I was incredibly attentive as he bustled around the kitchen. (They don’t call me the doggie vacuum for nothing). He was making a comfort food staple – macaroni and cheese. And not the gourmet kind with the roux and six different varieties of cheese (which he does also know how to make). The kind you can get for a dollar. Complete with the orange powder.

Generally I’m not that big a fan of the less is more idea. Us canines tend to indulge in whatever comes our way. But tonight less worked wonders on the winter blues. Joy. From the ground up, it happened in the Schmidt house today in spite of those nasty winter blues. And it didn’t take much.

“Your success and happiness lies in you,” Helen Keller suggested. “Resolve to keep happy, and your joy and you shall form an invincible host against difficulties.”

That’s the thing about joy – sometimes it takes a little effort to find it amidst the blues. But once you do it almost always is worth the search. Especially when it only costs a dollar.