It started with a collar. It had little candy corns on it, and my mom bought it at the Menomonee Falls Pet Fair three years ago today. She had yet to actually have a dog in her life, and she was told this was bad luck. It’s bad karma to buy things for a best friend you’ve yet to meet, people told her (as if she was going to somehow jinx the search).

Here’s the thing: she had already met her best friend. She had met me a few days earlier. She knew she loved me at first sight. But her and dad’s first visit to me was so late in the day the shelter wouldn’t allow them to take me home that same day. I knew she’d be back, but I didn’t learn until later that she almost wasn’t.

Since I had been previously returned, the people at Oshkosh Humane Society were particularly cautious throughout my adoption process to ensure this would be the right family. To ensure I wouldn’t be returned again. They didn’t like that mom and dad were a young couple who would likely be having children in the near future. They didn’t like that dad had never had a dog before. They said they feared my soon-to-be forever people were just falling in love with a cute face and weren’t prepared for the behavioral handful I could be.

Mom didn’t take any of this very well. She saw it as a direct attack on her ability to be a good doggie parent, and perhaps even a good little people parent. Apparently she and dad even resigned to the point they went to meet another terrier mix named Ariel at a different shelter.

The collar would have fit Ariel too. But dad wouldn’t have that. Meeting Ariel did nothing but prove to him that I was the one they were meant to rescue. So he called the people at the Oshkosh Humane Society, told them they were being harsh, and took me home about a week later. He fought for me and no amount of cuddles, kisses, or tail wags will ever thank him enough for that. 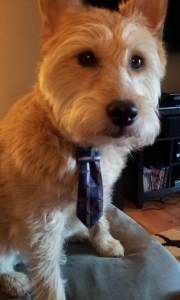 Ever since I was adopted mom takes me to that fair every third Saturday in August. It’s kind of our thing. So you can imagine my disdain when she and dad left this morning to run errands (which must not be any fun at all since I’m almost never invited along for them) and didn’t return until mid-afternoon. I was certain she forgot by that point and (to be honest) I was the slightest bit heartbroken. I understand that forgetfulness can happen during pregnancy, but I didn’t want to believe it. She couldn’t possibly forget our tradition.

Thank goodness dad reminded her. It’s never been his cup of tea, but he knows it’s important to us and he didn’t want the day to go by without us honoring our tradition. He fought for me again, which I realized today he does so often in so many different ways.

It started with a collar. And it ends with a tie. (Thanks to dad’s gentle reminder), mom and I had a fabulous time as we always do, and (in addition to all sorts of dog treats) I got a couple of doggie neck ties. There was a time in my life I didn’t know where my next meal was coming from, and now people love me enough to fight for me and take me to pet fairs and buy me neck ties (of all crazy things). Collars, neck ties, and dog treats aside, I would say that makes me one of the very richest doggies in the whole wide world.

I lick the excess water off my forever parents’ legs when they get out of the shower. I eat grass because I like how it tastes. I can’t resist fabrics that smell like my people. I don’t have many serious secrets. This may come as a surprise since my inability to talk renders me helpless in the gossip category, but (like most dogs) I also wear my heart on my proverbial sleeve.

So please don’t be mad at me. Truth be told, I have a pretty big secret I’ve been keeping in spite of myself. I thought I’d wait until the perfect words came to me. Or the perfect time. Or for time to come to a screeching halt long enough for me to find the right words. Because this isn’t just any secret. It’s life-changing.

But alas the stars have not yet aligned in a way to empower the grand announcement I’d hoped for and I honestly can’t keep it in anymore. It’s like 17th century French dramatist Jean Racine suggested “there are no secrets that time does not reveal.” I’ve waited, and the time to reveal is now.

I’m going to be a big brother!

The dreams I’ve had of becoming a best friend to a little person of my own are going to become reality in a little more than five months. My mom and dad are having their first very own little person!

I honestly think I knew before mom did. (Dogs have a sixth sense about these things). There was an almost immediate change in her heart rate, her smells, and her general persona. Joy. In a word, that’s what this secret contains. So you can imagine it’s been hard for me to contain my excitement about this for so long. But I figured if mom could do it, so could I.

It’s nothing like my other so-called secrets. Who really cares about my obsession with fabrics that smell like my people, my occasional craving for grass, or how I help my people dry off after showers. This is big news. This is life. Joy. Family. I’m so excited to become a big brother, but even more so for my little person to feel the love in this forever home of mine. Mom is home to me, and I know she will be home to the little person. January 16, here we come!