Perspective does funny little number on time. To a dog, a day when people are away at that place called work seems like an eternity. To a child, time is endless. To an adult, time is a precious commodity. To me, time is priceless.

That is why I don’t really understand what happens to people and birthdays. When you’re a little person, a birthday is something worthy of fanfare, presents and celebration. I’ve had the good fortune of attending several birthday parties for the little people in the family and they are always something to remember. They come complete with cakes with candles, beautifully wrapped presents and even the occasional water balloon fight (weather permitting). 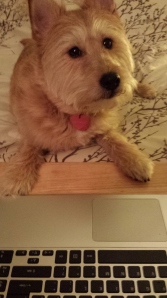 I must be missing a part of the puzzle. Because my forever dad never seems to want anything to do with any of it on his birthday. He turned 35 people years old yesterday and mom was sure to go about her usual attempts to commemorate the day. There were presents and mom got an ice cream cake, but dad wanted none of it.

Denial. From the ground up, that is the only emotion in the Schmidt home yesterday. Dad was in denial that he is another year older. Mom was in denial of his denial. I was in denial of all of it. And Carter? Well, he slept the majority of the time so I’m not really sure what he was thinking.

All in all it was one of those days you can’t wait to go to bed so it can be tomorrow. So that’s what I did. But today I got to thinking about these evolving perceptions of time. Why is it that birthdays stop being fun as people age? Age brings with it memories and love and wisdom. And I don’t care what dad thinks. I’m happy he was born, regardless of how long ago it happened.

I guess I side with American baseball player Satchel Paige. “How old would you be if you didn’t know how old you are?” he questioned.

Perspective. From the ground up, it does a funny little number on time. Heck, I turn the equivalent of 45 people years old in May and I’ve never felt better. And to me, time is endless, precious and priceless. Because instead of counting years I count blessings. And in doing so, I celebrate the years to come rather than counting the years past.

I thought I would be jealous. Once upon a time it was me they were coming to see. They would come and praise me and love me and pet me and bring me treats. That has all changed now.

The familiar faces whom I have come to know and love now come instead to pay attention to little Carter. They praise him and shower him with love and bring presents. I thought it would bother me, but it doesn’t.

Today as one of mom’s oldest friends held him I was overcome with the confirmation that this is my little person. My bundle of joy. And he is busy bringing joy to everyone he meets. Am I jealous? Heavens no. I’m proud to be part of this loving family.

It all started with a gift. It was Christmas Day 1997 and my mom and her little sister only asked Santa Claus for one thing that year. A puppy. They wrote to Santa, talked to him at the mall (several times), and prayed together every night that their wish for a puppy would come true.

So you can imagine their disappointment when there was no puppy under the tree on Christmas morning. It didn’t matter that there was plenty of other shiny packages with pretty ribbons and bows. There was no puppy. But a surprise lurked under the tree that later proved to be even better than a puppy. It was a package with a promise inside. “This coupon is good for one rescue puppy.”

It wasn’t from Santa either. It was from mom’s parents. They wanted mom and her sister (who were 12- and 8-people-years-old at the time) to be part of the process of picking the perfect puppy. And they wanted the puppy to be a rescue dog from the local animal shelter. It didn’t take long before they found her. Pheobe. It was love at first sight. Pheobe was the one.

Phoebe counseled mom and her little sister through their remaining years as little people as only us canines can do. She got dolled up in all sorts of clothes, learned most of the same tricks mom would later teach me (give kiss was a favorite of hers), and made mischief that brought joy to the hearts of the entire family. She was the very definition of the gift that keeps on giving.

Later in her life, she went to live with my mom’s great-grandma to keep her company after great-grandpa went to heaven. She’d grown a bit less spunky then, but had a gift for simply being there. She was an extra set of ears to listen. An extra set of eyes to see. An extra heart to love.

Sometimes it happens suddenly. Other times it happens over time. I’ve seen it happen both ways and I don’t think one is any easier than the other. Loss is loss. When it happens doesn’t fill the gaping hole left in the hearts of those left behind. It was a gradual decline for Phoebe, but that doesn’t negate the truth that the world lost another canine treasure today. Pheobe went to doggie heaven today, after 18 years of bringing all sorts of joy to the hearts of many.

But it all ends with a gift. And, just like Phoebe, it’s not wrapped in pretty paper or tied up with ribbons. It’s nothing fancy. In fact, it’s about as simple as it gets. We never got to meet in person, but we didn’t have to for me to know the gift Pheobe granted me. My gift from Pheobe was the same as that one my mom opened all those years ago. It was a promise. This coupon is good for one rescue puppy. Thanks to the relationship my mom had with Phoebe growing up, it turns out that coupon was good for more than one rescue puppy. So far, it’s been good for two. I will always have Pheobe to thank for that.

Rest in peace, dear Pheobe. You will be missed.