Disappointment. In a word, that is apparently how thousands of people who attended the 3rd of July fireworks in my hometown felt in response to the highly anticipated event. It was gloomy, foggy and cooler than anticipated for the spectators, the majority of whom had been holding their spots for the fireworks show as long as a couple of days. And after all that time waiting, the show was much more a feast for the ears than the eyes. 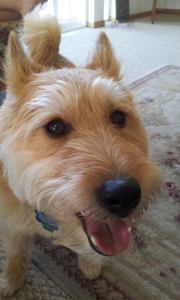 Tonight the noise carries on as people celebrate Independence Day all over America. It’s a day set aside to remember the sacrifices that have been made for our freedoms, and (in turn) pause to recognize the anniversary of the birth of our independence. The day is laden with traditions, most of which have always involved parades, picnics and fireworks. In a dog’s life, that means a day filled with treats, treats, and more treats. (Watermelon anyone?)

Though I have to admit I have never particularly cared for the loud bangs and booms that accompany fireworks, I do believe wholeheartedly in what they represent. They are bright, colorful and vibrant as they create a beautiful masterpiece in the sky. Aglow with radiating light, spectators smile and laugh and bond with family in these precious moments. Memories are created that last forever.

Unfortunately for the thousands of people who attended the fireworks in my hometown yesterday, the memories aren’t very positive. It was certainly a show they’ll never forget, but not in a good way. This got me thinking about what today is really about. Freedom. Liberty. Sacrifice. The pursuit of happiness.

None of these are found in fireworks. In fact, the fireworks gone awry remind me a bit of our best laid plans that tend to skid off track sometimes. It’s frustrating. No one likes or appreciates the detour (while it’s happening at least). And for good reason. Valuable time and effort goes into planning something so it is upsetting when things don’t turn out. And we do love and embrace our traditions. But things don’t always turn out.

Disappointment. Thousands of people felt it four about an hour straight yesterday. It is in these moments, when we’re about to let that demon of negativity into our hearts and minds, that it is most important for us to make our own fireworks. To be our own fireworks. To bring light and smiles to those around us and (in turn) to ourselves.  Let’s start ourselves a new tradition of sharing the fireworks of joy this year. That way no one will even notice if the actual fireworks are a gloomy haze of nothingness.