It’s kind of like counting sheep. It’s my understanding people do this sometimes to calm their minds into falling asleep. This would never calm a canine mind (for obvious reasons) but my method sure does bring me peace. I count my blessings.

The list includes the obvious characters who make up daily life (like mom and dad), as well as the less obvious things (like my special spot under my favorite tree in my backyard). Today I noticed something about the list I couldn’t keep from sharing: it never seems to get shorter. Instead, it seems only to grow to include more of the obvious (and not-so-obvious) luxuries in life.

I recognize this in itself is a blessing, and yet it got me to thinking. What would happen if something fell off the list? What if one of life’s not-so-little luxuries went away for some reason? Which could I not live without?

My constant flow of healthy food and water came to mind, followed closely by their (slightly less necessary) tasty counterparts peanut butter and bacon. And Mr. and Mrs. Prickles. Losing them would be a major problem. But I know my people would never let me go hungry. And (as much as I hate to admit it) Mr. and Mrs. Prickles are indeed replaceable (exhibits A and B: Flea and Angry Bird). 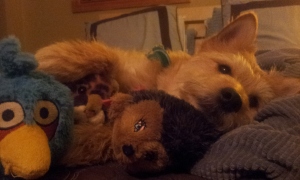 It wasn’t until later in the day I realized what ties the list together. I tend to think through these things around the same times each day. Morning and evening. Both times have something very important in common. My bed. And I’m not talking about the dog bed in the kitchen. Nor do I understand the appeal of a dog bed (which comes home smelling like a factory) compared to a people bed (which contains all of the smells of our people us dogs long to be near at all times).

It was not an easy battle to conquer either. I took mom down first with what I fondly refer to as “the look” combined with my persuasive cuddling skills. Getting dad to agree to the arrangement was a whole other game entirely. I had to be strategic about it. And patient. Until one night (after more than two years of effort on my part) “the look” and my cuddling skills struck again.

Since then I’ve secured my spot in the bed and I will not let it go for all the dog treats in the world. It’s ridiculously comfortable. It smells heavenly. And it’s where I count my blessings at morning and at night. But the more I think about it, I suppose even the bed itself is replaceable at least to a certain extent. Because (as much as it is indeed the coziest bit of people-smelling cloud a dog could ask for) it’s so much more than a bed.

As American screenwriter Francis Ford Coppola reminds us “I like simplicity; I don’t need luxury.” I suppose I don’t need luxury either. I just need my people. It’s that simple. So as I count my blessings tonight from my perch on the bed, I give thanks not for the comfy cloud itself. Rather I give thanks for its representation of the love I have for my people, and their love for me. Ultimately I think that is the luxury I truly could not live without.