The sky cried today. It was dreary and cold and windy outside. But none of that mattered, because there were no tears inside. There was only warmth and laughter and relaxation. 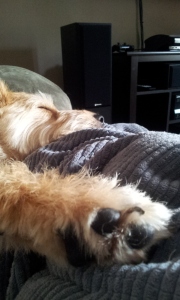 The bad news is that had a lot to do with the fact that this illness that my dear forever mom has is spreading. Between dad’s sneezing and dear baby Carter’s coughing, all I can say is I’m pretty relieved things like this usually don’t pass to man’s four-legged friends.

The good news is it was a day to remember. I honestly can’t recall the last time I watched as all of my dearest people spent the day together in their pajamas. It didn’t matter that the sky was crying and it was cold and dreary outside.

Inside there was playing and resting and playing some more. There was snuggling and cuddling. There was joy, from the ground up.

Yes, there was also sneezing and coughing. And yes, no one is feeling 100 percent. But today, as I snuggled into a spot much too small for me next to mom and dad and Carter on the couch, I realized how important these days are to have every now and then.

It doesn’t necessarily need to happen in pajamas, but there was something nice (and cozy) about the fact that it did. As a (somewhat professional) observer of people, I can say with some authority that today was necessary regardless of the coughs and sneezes.

The reasons are different for everyone. Around here, it’s been all things baby No. 2 lately, with endless errands to stockpile things like diapers and make sure the nursery is just as it should be. Weekend respite from the daily grind doesn’t always happen like it should between nap times, at least not with groceries to buy and cleaning and laundry to be done. Rat race takes on a whole new meaning when there’s a new little person on the way.

So what happened today was special. Sometimes you really do just need to be still. To be together.

I think I would probably put it darned near close the very bottom of the emotional barrel. Somewhere close to negativity and rage. It’s just one of those personal things with which I, the dog who makes an effort to find the good in all people, places and things, struggle to find a silver lining. Helplessness. From the ground up, there is really no way to sugar coat the way helplessness breaks my heart.

Yet that’s how I have felt for going on three days now, as my dear forever mom does her very best to fight some sort of cold that won’t quit. .Not since Battle Bra Royale in her pregnancy with Carter have I seen her so miserable. And not since then, when (if I recall correctly) she was oddly enough also right about seven months pregnant, have I felt so incredibly helpless. 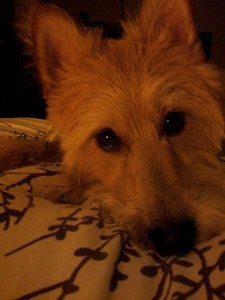 At least I am in good company, especially with my dear forever dad who also struggles with the insatiable urge to fix it. (Carter is pretty oblivious, I think, though he has been somewhat more generous with the hugs he gives mom in recent days).

Helplessness. It shook my forever home today as dad ran to the store (twice) for something (anything) that mom can take that is deemed “safe” for pregnancy. Twice he came home with the wrong thing, causing mom to break down in tears. It really was a lose-lose situation for all of us today.

Until tonight, when I did all I can do. As she snuggled into bed much (much) earlier than usual, I snuggled my way as close to her as possible, laid my head on her protruding belly, and sighed heavily. She looked at me, with her puffy eyes and bright red nose and smiled a brighter smile than I’d seen from her all day. She snuggled me closer to her, and I laid there by her side until she fell asleep.

Helplessness. From the ground up, it’s one of those things I struggle with being the optimist I am. Not only is it hard on the helpless helper, but it implies someone or something in need of help isn’t getting what they need. That is, until you realize maybe you’re not as helpless as you think you are.

There’s coughing. And sneezing. And lots (and lots) of tissues. All of these things made for a very tumultuous night of sleep last night at absolutely no fault of dear baby Carter (who ironically slept more soundly than he has in weeks).

My dear forever mom is, as they say, sick as a dog. Though I’ve never fully understood that phrase, this seems an appropriate time to use it. Normally, she would run to the drug store for the usual arsenal of cold-fighting medicines and kick this thing in the butt. But she’s pregnant. So nothing is normal. 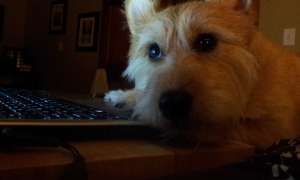 Instead, I watched as she (albeit sluggishly) made it through the day. Though I would say that is exactly what she did (made it, barely), I noticed something throughout the day that made my heart smile. She woke up and got out of bed (very) slowly, rubbed her tired eyes, and slipped on her slippers. What surprised me came next.

“Good morning, sunshine,” she said to Carter, in her cheeriest voice. She smiled at him and he hugged her and (at least in that moment) everything was okay. I saw it in glimpses throughout the day, too. Because she was clearly tired. And that makes working and keeping up with a toddler even more challenging.

I listened as she kept painfully clearing her throat to cheerfully talk him through the day. I watched as he hugged her more than usual, almost like he knew she wasn’t quite herself (in spite of how hard she tried to hide it). And I felt the love in my dear forever home.

Today I realized there are indeed no sick days as a parent.

There was coughing and sneezing and so very many tissues. And yes, mom is, as they say, sick as a dog. But today she became living and (albeit barely) breathing proof that whatever this sickness is will not get the best of her. Because she’s a mom. She’s being a mom to the baby in her decision to use only natural means to tend to whatever illness ails her. She’s being a mom to dear Carter by doing her very best to stay cheery for him even though I know she feels anything but that.

She’s a mom. There is power in that. There is strength in that. If that’s not enough to kick this thing, I don’t know what is.

It’s going to sound pretty unbelievable given the circumstances. A lot has been going not quite right around my forever home recently, most recently involving my dear forever mom and dear baby Carter and their bout with some sort of flu bug.

My forever dad somehow is seeming to make it out unscathed, but my 21-week-pregnant mom and 13-month-old Carter are suffering. Coughing and sneezing, mixed with headaches that hurt in their heads and their tummies don’t make for a pretty picture around here. Mom’s attempt to soldier through has been relatively unsuccessful, resulting in health-related misery for all of us. It’s not fun for dad and I to watch. And I know it’s not fun for mom and Carter to experience. 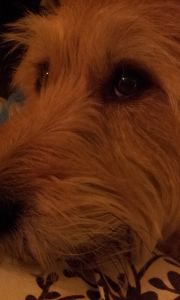 So when it happened late this afternoon, it was a breath of fresh (and unexpected) air. Carter was crying and coughing and mom was holding him with her eyes closed in pain from the headache that wouldn’t quit. This song came on that sounds the slightest bit like their song (Somewhere Over the Rainbow) and the crying stopped. The eyes opened. And they both saw the sunshine coming in through the window (which I coincidentally sunbathed in the majority of the day).

For those four minutes and twenty eight seconds, there was no pain or illness. There was only joy, as mom and Carter rocked together, Carter with his little head on mom’s shoulder, mom with her head on his.

It wasn’t a miracle cure by any means. The coughing and sneezing and headaches continued well after the song ended, and will likely continue beyond tonight. But it was a reminder of all that is good in the world. I could feel the love in the room as the song filled the space. There’s something about being sick that seems to make dear Carter cling to my mom like the monkey he is. And she doesn’t mind one bit.

I know it sounds pretty unbelievable given the circumstances. A lot has been going not quite right around here recently, and this flu bug is no exception. This too shall pass. And in the meantime, we remember the wonderful world that exists around us.