It doesn’t happen often, but I’m man (er, I mean dog) enough to admit it when it does. Sometimes I’m wrong. There, I said it. And while I’m not entirely sure whether I’m wrong about this, I realized today that I could be. 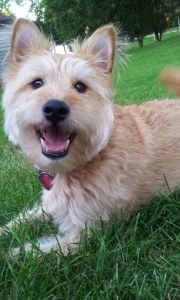 I’ve never much cared for the phrase “what if.” What if I had more money? What if I could change the world? What if I had never found my forever people? To me, these two words pay homage to something for which I’ve never much cared. There is a negative, almost cynical tone to these questions that I can’t say I appreciate. It seems contradictory to my desire to live in the now and cherish the presence of presence.

But the more I watch dear baby Carter and his efforts to explore and understand the world around him, I realize I could be wrong. Today I observed as some of my favorite little people played and laughed and smiled together. Dear Sophie and Abigail and Sam all wrestling around with little Carter as he starts to figure out how to crawl. It was just as I had always hoped it would be.

In those moments, just after he froggie hopped his way across the room from Abby to Sophie and back again, I was reminded of everything he has in front of him. His life is literally full of “what ifs” right now. And there is nothing wrong with that. Not only that, but there’s something exciting, invigorating even, about it.

“Start by doing what’s necessary; then do what’s possible; and suddenly you are doing the impossible,” suggested Italian Catholic preacher Saint Francis of Assisi.

So I guess I might have been wrong about my perspective on this phrase all these years. Because ultimately that’s what it comes down to yet again. Perspective. From the ground up, it has a way of changing the glass from being half empty to being half full. It has a way of making us see what’s possible within the impossible.