Toys and clothes and food and mobility. If there’s something I’ve learned from my time with my dear little person so far, it’s that things constantly change.

Storage bins of now-too-small onesies and outfits are accumulating in the basement of my forever home. Rattles and stuffed animals have been replaced with toy cars and blocks. Breastmilk is no longer the sole source of all things nutritious. And running is the norm these days (because apparently walking is for babies).

Just when my dear forever mom starts to figure things out, dear baby Carter changes it up on her.

But there are some things that remain the same regardless of the time of day they happen. Eat, wake, sleep is still a thing. A self-proclaimed nap nazi, my mom ensures there are at least two naps a day, usually in the morning and afternoon. And much of the bedtime routine has persevered.

I realized it tonight after dinner though. Four months ago, my favorite time of day was the time I spent alone with mom after dear Carter went to bed. While I do still value that time above most things, tonight I noticed the joy in my heart abounded more at a certain (pretty special) time other than that. 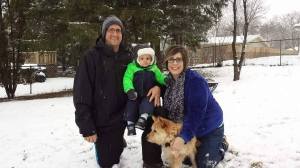 I’ll call it family time. It’s this tiny fraction of our day really. It never really happens for the same amount of time each day either. But even if it lasts for 15 minutes, it’s become my new favorite time of day. There’s pickle in the middle sometimes. Other times it’s just mom, dad and I sit back and relax while Carter engages in all kinds of goofiness. Tonight he almost figured out how to ride the toy car he got for his birthday a few weeks ago. It probably sounds like nothing, but this has been no small feat for him. Not to mention the laughs my people have gotten over watching his efforts.

That’s the thing. It doesn’t really matter what we’re doing. What matters is that, for those precious minutes, we are all together. And there is joy, from the ground up.

I know toys and clothes and food choices will probably all continue to change. I can’t imagine what it will be like when the changes integrate another little person into the mix. But I do hope that family time remains a part of the day, even if it is for only a few precious minutes. Because that is (by far) my new favorite time of day.

I will never forget the day mom and dad found out they were going to have a little person. My forever mom had a suspicion days before it was confirmed, which I could somehow sense. I know there are naysayers when it comes to a dog’s sense of smell, but I completely disagree with every single one of them. I knew before mom did that she was pregnant.

That doesn’t change the magic of that moment for me though. The moment when she woke dad up one chilly spring morning and flung the stick with the tiny little lines on it in his face. “We’re pregnant!” she said. Though somewhat surprised by everything the moment had to offer, dad shared in her enthusiasm after he had appropriate time to digest the information. They were pregnant. They were having a little person. They were going to be parents.

It’s hard to believe that day is almost a year and a half ago already. Dear baby Carter will soon be nine months old (going on three-years-old depending on who you ask). Time flies, but I’ve found there is something that doesn’t. Tiny little lines. From the ground up, they have their way of sticking around well after that pregnancy test if you ask me.

Take today, for example. Carter has taken to cuddling with mom as he falls asleep at night, which (after months of him wanting nothing to do with snuggles) mom was (albeit selfishly) enjoying. But I know because I’ve been there to witness every single book and blog and article she has read on parenting that she doesn’t want to “spoil” him. So tonight, against her better judgment, I watched as she prayed her bedtime prayer with him, rocked him for a minute and put him down. He cried a bit, but fell asleep shortly thereafter, so I know it was harder on mom than it was on him.

But the truth is I also know this is one of many tiny little lines she and dad will have to cross, just as they did the news that they were having a little person all of those months ago. No matter how many books or blogs or articles they read, one thing remains. They are parents now. Ultimately, it’s up to them to define the line and stick to it.

“Boundaries are to protect life, not to limit pleasures,” as Christian author Ed Cole suggested. I don’t know much about them myself, but I from what I do know I definitely agree. Because I never will forget the day mom and dad found out they were pregnant. That was the day they found out the were having a little person.

But beyond that, they were going to be parents. And along with that, there are lots of other days I won’t forget any day soon. Like today, when mom decided that as much as she wanted to snuggle Carter to sleep, it would not be in his best interest to do so. Sometimes it’s not easy to do the right thing. That doesn’t make it any less right.

After a several month hiatus, I might dare say the snuggle master otherwise known as dear baby Carter has returned. Not only that, but the revival has brought with it another thing of the (not-so-distant) past. The silly little sleep smile that first brought a joyful tear to mom’s eyes all those months ago has returned to Carter’s cuteness repertoire.

Apparently mom first noticed it as she rocked Carter to sleep last night, and it happened again tonight. It’s nothing I could see from my vantage point (especially since it was dark), but just hearing her talk about it so fondly, as if it was something she thought she might have lost touch with forever, really brought home something for me.

I was being rather aloof for a few months there. All of the time I’d spent in my little doggie life dreaming about what it would be like to have my very own little person became a reality for which I don’t think I was adequately prepared. I had envisioned the games of fetch and running around together in my backyard paradise. I hadn’t exactly imagined the loud noises (which all amplify with my fine-tuned doggie hearing) and the fur and tail pulling (ouch!). I also didn’t realize especially my mom could love something more than she loved me. (Other than dad, obviously).

But alas, since the day he was born, mom will tell anyone who will listen about how she never knew she could love something so little so much. Don’t get me wrong, I’m happy for her. I’m happy she’s so happy. She’s a completely different (more genuinely joyful) person than she was when I started this blog all of those months ago.

I think it’s probably something every fur baby who preceded the first child in a forever home comes across. The reality is I’m no longer top dog around here. And, while that has taken some getting used to (primarily by means of me hiding out in various locations where people aren’t in my forever home) I think I’m over it.

That silly little sleep smile is back. And in a way so am I. I realized it tonight as I curled up on the rug in Carter’s room I know is there specially for me. I could tell mom was seeing that silly little sleep smile because her smile (and her happy tears) gave it away. I’m not doing anyone any favors by hiding away. Ultimately all I’m doing is missing the joyful moments that make the chaotic ones worth living. That ends today.

It’s the same thing every night. Eat, bathe, cuddle, sleep. I don’t know about baby Carter, but its a routine with which I could get pretty comfortable. My role in all of it is pretty minimal. I usually oversee the bathing process and lay patiently on the rug I know is just for me in Carter’s room while mom rocks the baby to sleep. Soothing sounds fill the room and I frequently drift off to dreamland myself, albeit temporarily.

Tonight was different. Tonight I put my paw down. I’ve had enough of this cuddling business not involving me so I quit laying idly by. Instead I hopped myself right onto the tiny portion of lap mom has to spare on the rocking chair and laid myself down. I stopped watching and started living (or, more accurately, cuddling) in that moment. And it was grand.

I was quite comfortable drifting into dreamland there in our cuddle bubble. What happened next took me by surprise given the intense feelings of joy I felt just a few moments prior. It was Carter’s 12th birthday (in people years, not dog years) and he was blowing out the candles on the cake. I waited patiently to see myself, pestering my way into the mix to get a lick of frosting as I tend to do. But I never came. I wasn’t there to see Carter turn 12.

The image jolted me right out of dreamland and back to reality. And (for once) I’m so glad it did. Because there I was, cuddling with my forever mom and my little person. Joy. From the ground up, it overwhelmed my little doggie heart in those precious moments together.

Because my dream tonight contained within it a wake up call. There is a chance I will still be around to get that lick of frosting after all. But it’s more likely I won’t.

Eat, bathe, cuddle, sleep. It’s the same thing every night and promises to be that way for the foreseeable future. Some might see it as monotonous, but (as is typical to us canines) I find routines soothing. They bring order to a world that can seem chaotic at times. In those moments, those precious moments, the world is exactly as it should be. I think I will be sneaking my way into cuddle time more often from now on.