Mom calls it a God thing. When something unusual happens that seems to right a wrong turn in life.

I’ve had several that I can think of, but one stands out in my mind as one of my life’s most powerful turning points. It happened the day of my great escape from the house with three other dogs and two cats. The house I’d hoped to be a forever home ended up feeling more like a dungeon. And I wanted out.

The doggie door had been tempting me for weeks. And I knew I could clear that four-foot fence if I really put my mind to it. Nothing was going to stop me from achieving my ultimate goal. Freedom. Freedom from a house ruled by people who didn’t really care for animals.  Freedom to find my own food on the streets instead of scavenge for scraps when there wasn’t enough dog food to go around. Freedom from feeling unloved.

There’s something better out there for me, I thought, and I’m going to find it! So one mid-summer day while the people were away at that place called work, I left it all behind. I cleared the fence, and tore down the first few blocks before I let myself slow down. No turning back. I remember breathing in the fresh lake breeze coming off the beautiful Lake Michigan shoreline and feeling like I had the world at my paws. 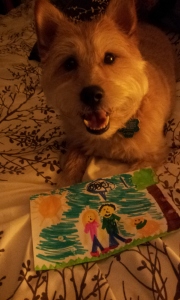 That’s when it happened. I stumbled across a crumpled up piece of paper on the sidewalk and stopped to sniff it. It smelled like peanut butter (which is one of my most favorite things) and strawberries. It was a drawing of a house with three stick people I recognized vaguely as a mom, a dad, and a little girl (most likely the artist who smelled like peanut butter). What caught my eye (and pulled at my heart) was the little brown stick doggie she was holding. It appeared to be a puppy of some sort (it’s hard to decipher breeds in stick drawings). And everyone was smiling.

So I made my way, slowly but surely, back to the house of unrest. And (at the time I thought) my whole plan backfired because “my little escapade” as the people called it was “the last straw.” They returned me to the humane society that same day, never to return.

I didn’t know it until later, but that crumpled piece of paper changed my life forever. I may have stayed the course if I hadn’t smelled the delicious peanut butter-y goodness. I would have kept going if not for the image pulling at my heart strings. And if I had I may have never met my forever parents. The people who make up my picture perfect life.

Mom calls it a God thing. I call it faith coming to life. We all have moments with our own versions of the crumpled up piece of paper. Moments that point the way. Moments that change our life forever. We just have to keep our eyes, hearts (and noses) peeled so we don’t pass them by.