The sky is crying tonight. And it’s not whimpering in a corner. It is throwing an all-out temper tantrum complete with bright flashes of light and loud bangs that echo through the walls of my forever home. I don’t particularly care for thunderstorms, but I’m grateful I they don’t frighten me as I know they do some dogs. 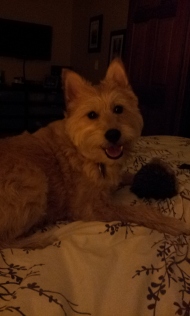 Instead, I find myself cuddling a little closer to my people and bearing down until the tantrum is over. It sounds like a little thing, but it’s pretty big to me. That’s the funny thing about perspective. What might seem small to you can make or break another person’s day, week or month. Just as I am a believer in the importance of remembering the person behind the people, I appreciate when people place value on the little things.

Like when my groomer Mary stops to pet me and tell me she thinks I’m handsome while she’s got me in that terrible bath. Or I get an extra treat from Bonnie at the Starbucks drive through. Or (best yet) when anyone I come across smiles from the heart. None of these take much effort from the giver, but they the capability of having a profound impact on the receiver.

“For in the dew of little things the heart finds its morning and is refreshed,” suggested my favorite Lebanese philosopher Khalil Gibran. That’s why I call them little big things; they are incredibly valuable no matter what your perspective in life may be. Because let’s face it. Life gets stormy sometimes.

We can’t control when it happens, but sometimes the world seems to roar and shake around our feet. It is these moments, amidst these bright flashes of light and loud bangs that echo in our hearts, that the little things matter most. Like snuggling close to my forever people when its raining cats and dogs outside. Or offering a helping hand to someone who needs it. Or paying someone a hard-earned compliment. They might seem like little things to you, but sometimes the littlest things have the power to calm the biggest storms.

The sky cried so hard today the tears did some serious damage in my neighborhood. I usually do all right with storms, but I don’t know if I’ve ever experienced one like this alone before. My people were still at the place called work, which seemed unusual since it was incredibly dark outside. The lightning was blinding and the thunder deafening. The wind seemed to shake the house and I thought the rain was going to break into the house somehow. Then the power went out and all I could do was wait.

Everything quieted down outside, but pandemonium continued when dad got home and let me outside. Trees are down and power is out throughout the neighborhood, I heard a stranger tell my dad, and basements are flooding everywhere. We were fortunate that our basement was the exception to the rule, but our neighbors on either side weren’t so lucky. And that’s when I heard something I didn’t really want to believe. Our friendly neighbor man died suddenly on Sunday, the stranger told my dad. I remember hearing the sirens and seeing the lights on Sunday night and saying a prayer that everything was okay. It wasn’t.

I felt like I’d gotten kicked in the doggie gut. The man was fairly young in people years (in his 50s I would guess), and had been having some health problems, but I didn’t think it was that bad. They just had everyone in the family over to their house that day. I’d never seen it that busy before. And it was incredibly hot and humid on Sunday but everyone was together and happy. There was all kinds of giggling children running around and tents and food and a bouncy house. It was the perfect day. Until it wasn’t.

I’m no stranger to loss so I can say with confidence that the friendly neighbor lady the man left behind probably feels like she’s in her own kind of power outage right now. Everything seems dark around her except for perhaps the occasional unwelcomed burst of thunder and splash of lightning. Its so much easier to see darkness instead of light right now. But what matters are those flashlights and candles, those light bulbs and lanterns, who bring the light into the dark. People have been in and out of that house constantly since it happened, offering their own sources of light.

The sky cried hard today. It brought down some trees and power lines. We lost power for a few hours. But ultimately the power was restored. Life’s power outages can ironically be pretty powerful sometimes. Whether we are alone or surrounded by people, these storms can take away our senses and leave us in the darkness. The wind can shake us to our core. And the tears feel like they will never stop. But they will. Just as all power outages eventually come to an end, the good news is with the help of life’s flashlights, candles, light bulbs and lanterns, our power too is eventually restored.