There are those who believe dogs cannot see rainbows. Then there is me, and I’m here to tell you we can. Sure, they may not be quite as vibrant and fabulous as what people see but they are still visible to us.

In actuality colorblindness isn’t all that bad. We can see the color spectrum; we just struggle with certain (albeit important) colors like red and yellow. But it doesn’t matter that our real-life rainbows look more brown and blue than red and purple. We don’t need to see all of the colors to appreciate their significance. Opinions vary from person to person, but I’m a believer in the theory that rainbows signify a promise. Storms happen in all areas of life, sometimes when we least expect it. But the rainbow always follows, carrying with it a promise of renewal. A promise of safety. A promise of peace. 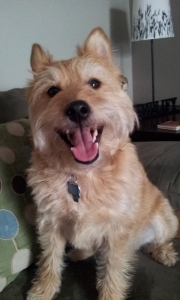 I saw a different kind of rainbow today. It happened when I met Winston (the terrier mix) and Mallory (his two-legged best friend) at the dog park. Mom was kind enough to arrange the meeting in response to an email I received recently asking if I would be interested in guest blogging for the local chapter of the American Red Cross. (It is my understanding this is the place called work for Mallory). They have been wanting to integrate some dog-friendly information, and hoped to do so with a new voice.

Well, to say this new voice is excited is definitely an understatement. But excited isn’t the only thing I feel after our meeting. I feel like I came face to face with a completely different kind of rainbow. Not the physical kind that little people watch for in the sky after a downpour. The kind that originates in the heart.

While the Red Cross focuses on proactivity and preparedness, most people are more familiar with their responses to disaster. To the shocking aftermath. To devastation. And rightly so, if you consider the staggering numbers of people that the Red Cross has assisted. In the ten minutes it takes to read this blog post, 2500 people were assisted by the Red Cross*. Two thousand five hundred people who have encountered various types of disasters. Helped in life-changing ways. In ten minutes.

I’m no stranger to emotional disaster. Maybe that’s why I like rainbows so much. So I don’t agree with those who believe dogs cannot see rainbows. Indeed red is one of the colors us canines struggle to identify, but that doesn’t mean we don’t recognize a rainbow when we see it. Today I saw the rainbows the Red Cross brings into the previously stormy lives of others. Rainbows of renewal, safety and peace. And I was inspired. It didn’t rain today. There wasn’t a rainbow in the sky. Instead there was a rainbow in my heart.

(This is also the blog to which I will soon be contributing. Check it out!)